We brought it up first last fall, and now Morris Grilled Cheese owner Michael Jacober and chefs Chris Austin and Nick Curtola will finally open Glady’s at 788 Franklin Avenue this Friday. The centerpiece of the kitchen is a massive wood-fired grill with an integrated rotisserie; a mix of hardwood and dried Cabernet Franc vines will be used to smoke the meats all day long, and grilled cheese sandwiches will actually be grilled over an open flame. But that’s not all.

“I wanted to evoke an all-American sandwich shop,” Jacober says, mentioning that he was once a regular at Dewey Dufresne’s pioneering Joe’s in Providence, Rhode Island. “It’s most important to me for this to be a real neighborhood spot.” 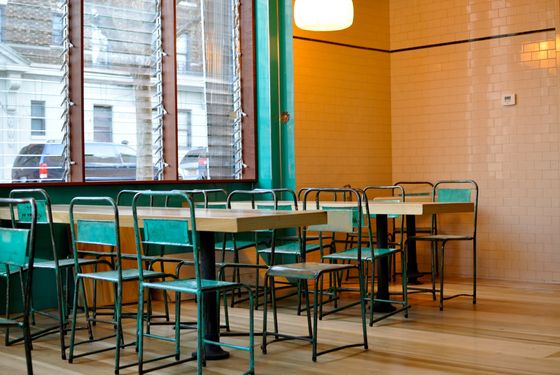 The dining room has 28 seats, with aother eight at the bar.Photo: Hugh Merwin

Curtola, who cooked at Franny’s, Roman’s, and even at Noma, explains that most everything on the menu involves one or more components made from scratch. The restaurant canned its own tomatoes, for example, and is making its own ricotta and charcuterie (including testa and morcilla).

Bar snacks include house chicharrones dusted with crushed fennel seeds, fennel pollen, chiles, and lemon zest. Sandwiches include one made with dried and salted dorade in the style of brandade, served with Windsordale cheese and charred onion. The pork knuckle sandwich starts with meat pulled from a slow-cooked shank, and is layered with housemade apple butter and agrodolce cippolini onions. Larger format entrees include half a brined and roasted chicken served with arugula, lemon, and jus. The restaurant will also serve pork loin with coal-roasted vegetables and maple mascarpone. 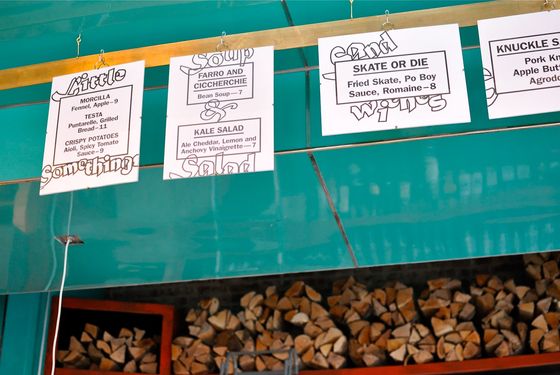 Glady’s will feature an ever-changing roster of ice creams, including a chocolate flavor mixed with crushed speculoos cookies and then served with torched, housemade (of course) marshmallow fluff. Bartender Graham Files has put together a list of straightforward cocktails, including Planter’s Punch, but the restaurant is also barrel-aging Negronis and is even bottling what Jacober calls “boozy sodas.” The house ginger beer will be put to good use in a drink called the Darker and Stormier, which includes dark rum, some fizz, and a scoop of housemade lime sherbet. 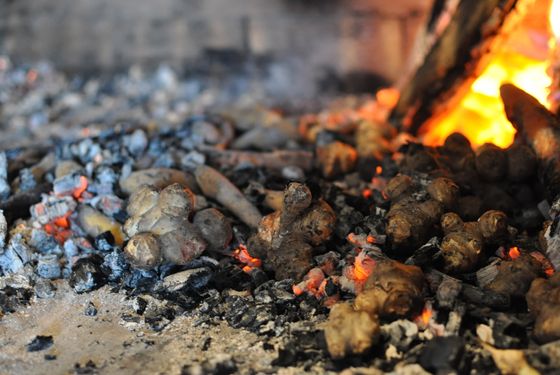 Sunchokes and other vegetables roasting in hot coals.Photo: Hugh Merwin

The restaurant will open for dinner only for its first eight weeks or so, but then will add breakfast, lunch, and brunch hours. While its lineup and daily specials will change constantly, you can check out the opening menu below.

talking to Yesterday at 10:55 a.m.
Welcome to the New York Nicoverse Grabbing sandwiches with Nicolas Heller and his band of unlikely food influencers.
By Jason Diamond
what to eat June 27, 2022
A Lovely New Salad That’s Also Pure Garbage At Patti Ann’s, the garbage salad takes equal inspiration from Chicago steakhouses and French fine dining.
By Alan Sytsma
the grub street diet June 24, 2022
Dog Researcher Alexandra Horowitz Consumes ‘Prodigious’ Amounts of Fruit “A mealy peach is an insult to the mouth.”
By Rachel Sugar
lawsuits June 23, 2022
The Bellucci’s Pizza Battle Is Headed to Court The owner of Bellucci Pizza has sued Andrew Bellucci.
photo essay June 23, 2022
Inside the Lesbian Dance Party That Spills Out Onto Bushwick’s Streets “Everyone feels so good.”
By Megan Paetzhold
the year i ate new york June 23, 2022
Where to Find Not-So-Hidden Jazz in Midtown East Does anyone go north of 40th Street after 9 p.m.?
By Tammie Teclemariam
best in class June 22, 2022
13 of the Very Best Water Bottles Always be hydrating.
By Emma Wartzman
closings June 22, 2022
Fleishers, the Original ‘Rock Star Butcher,’ Has Closed For Good The company went from artisanal darling to dead meat in less than a year.
By Caleb Pershan
openings June 21, 2022
The Brooklyn Takeout Joint That Got Its Start on Thai Tinder “We’re just a little grenjai.”
By Leah Bhabha
openings June 17, 2022
Drinks Are Flowing Again at Fort Defiance The Red Hook local has its liquor license and a newly opened back bar.
the grub street diet June 17, 2022
Chef Ayo Balogun Celebrates With Pancakes and Coca-Cola “It’s like my own Champagne — we bust out the Coca-Cola”
By Rachel Sugar
openings June 16, 2022
Inside Yun Hai, a New Shop Dedicated to the Bounty of Taiwan The general store opens in Williamsburg this weekend.
By Chelsea Peng
the year i ate new york June 16, 2022
How I Celebrated My James Beard Award Luxury Cheetos, a stop in Ohio, and three perfect diner tacos.
By Tammie Teclemariam
interview June 15, 2022
Meet the Man Who’s Selling Beer at Every Big-League Ballpark in America Reginald Duvalsaint would really like to give you a Bud.
exits June 15, 2022
Our Restaurant Critic Says Good-bye After 22 years and one zillion meals, it’s time to move over.
By Adam Platt
father's day 2022 June 14, 2022
The Best Gifts for Foodie Dads Foolproof ideas for the dad who says the quickest way to his heart is through his stomach.
awards June 14, 2022
Here Are the Winners of the 2022 James Beard Foundation Awards It was the first ceremony since the pandemic began.
By Chris Crowley
restaurant review June 13, 2022
Nudibranch Displays an Accomplished Sense of Personal Style Soba and so much more.
By Adam Platt
the grub street diet June 10, 2022
Alex Edelman Is Trying to Find His Breakfast Routine “I congratulated myself mid-prep for being so adult and responsible.”
By Alyssa Shelasky
groceries June 9, 2022
It Is Time to Start Hoarding Sriracha Again Huy Fong announced it has halted production because of a “severe” chili-pepper shortage.
More Stories