The Italian, with the works, of course. Plus, Tastykakes. Photo: Melissa Hom

Let’s get this out of the way up front: Dave Bagan exhausted his options trying to get Philadelphia-baked rolls for his new hoagie shop. It’s that soft, if not a little chewy Italian bread that cinches the authenticity for sandwich pundits nine times out of ten, after all. But when Brotherly Love bakers could only offer to ship parbaked and frozen product, Bagan took a fresh hoagie roll over to Parisi Bakery in Little Italy. After some R&D, he’s happy to report he’s got the model that will serve as the foundation of his five-sandwich menu at Dave’s Hoagies, which opens Monday on Cedar Street. “This bread is as good,” says Bagan, “if not better than the hoagie bread I had growing up.”

The former banker was raised in South Jersey near Philadelphia, ate a lot of hoagies with his dad when he was a kid, and says he always wanted to open a restaurant. Below, you’ll notice the menu at Dave’s Hoagies, which is a tiny 700 square feet and only has room for four counter stools, includes housemade hummus. Otherwise, says Bagan, the shop aims to honor the hyper-regional sandwich. Here’s a closer look at the Italian: 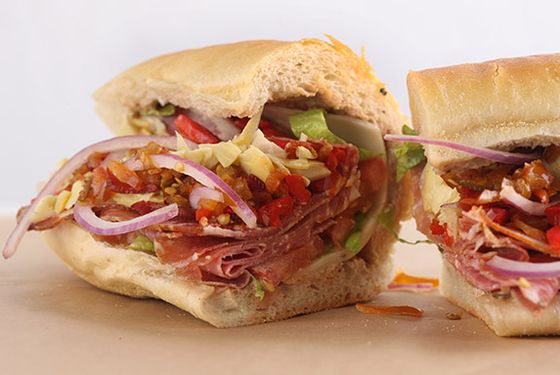 It’s got the “works.”Photo: Melissa Hom

Bagan says he tested 30 varieties of hoagie sauce before settling on what will be the shop’s proprietary version. It seems to pain him to say it, but he’s made one concession in that department as well: Rather than using squeeze bottles to garnish sandwiches with hoagie sauce, Dave’s sandwich-makers will dress the hoagie roll first. “The last thing I want is for a trader to have an oil spot on his Hermès tie,” he says.

The shop will be open six days, lunch only. Plus, for Philadelphia-appropriate dessert: Tastykakes, obviously. Bagan’s starting lineup is Butterscotch Krimpets, Peanut Butter Kandy Kakes, and Cream-Filled Buttercream Cupcakes. “I’ll try to bring in some more if the people want more,” he says.

First Look at Dave’s Hoagies, Bringing Philly Sandwiches and the Works to

best in class Yesterday at 12:00 p.m.
11 of the Very Best Air Fryers Custard toast at the ready.
the grub street diet Yesterday at 6:00 a.m.
Karen Chee Is Looking Forward to Her Morning Egg “Peeling the shell is like unwrapping a gift.”
By Rachel Sugar
the year i ate new york Sept. 15, 2022
What’s Wrong With Cocktails Right Now? Bartenders and drinkers both seem a bit bored.
By Tammie Teclemariam
rip Sept. 14, 2022
RIP to the Wine Genius Who Created Two-Buck Chuck Fred Franzia had a way with words too.
gifts they might actually want Sept. 14, 2022
The Best Gifts for Beer Lovers, According to Brewers and Beer Lovers Because you can do better than a novelty beer helmet.
openings Sept. 14, 2022
A Le Coucou Chef Has Taken Over at Manhatta Justin Bogle breaks down the technique on a dozen new dishes.
By Joshua David Stein
report Sept. 12, 2022
Why Have Restaurant Menus Gotten So Simple? Call it the great pare-down.
By Chris Crowley
the grub street diet Sept. 9, 2022
Emma Steiger Eats Dinner at 3:30 — and Again at 10:45 “Even when we ordered, we knew it was too much food.”
By Alan Sytsma
reopening Sept. 8, 2022
Great N.Y. Noodletown Makes Its Triumphant Return A long-delayed reopening has finally happened.
By Chris Crowley
rsvp Sept. 7, 2022
What It’s Really Like Inside a Blindfolded Dinner “The customer is really surrendering to the chef — it’s a lot of trust.”
By Megan Paetzhold
cooking Sept. 6, 2022
The Dinner Party Is Over No more cleaning up.
By Emily Sundberg
the grub street diet Sept. 2, 2022
Galen Druke Has Been Getting Into Protein Shakes “This is probably the most embarrassing part of my diet I’ll admit to, so I might as well get it out of the way up front.”
By Zach Schiffman
the year i ate new york Sept. 1, 2022
Pretending to Vacation in Bushwick Reliving my early 20s during the last unofficial week of summer.
By Tammie Teclemariam
commentary Aug. 31, 2022
Should You Still Pay For Dinner If You Were Robbed While You Ate It? An etiquette question for the age of outdoor dining.
fall preview 2022 Aug. 29, 2022
The New Restaurants You Need to Know About So many openings.
By Alan Sytsma
the grub street diet Aug. 26, 2022
Morgan Jerkins Buys Her Snacks Before the Edibles Hit “Who wants to walk around the corner when you’re really stoned?”
By Alan Sytsma
openings Aug. 25, 2022
A New Chophouse Is Opening in Brownstone Brooklyn Gus’s debuts next week in Carroll Gardens.
By Andrea Strong
the year i ate new york Aug. 24, 2022
Where to Eat (or Get a Massage) in Flushing If you’re taking the train to watch the U.S. Open, you may as well have a decent meal too.
By Tammie Teclemariam
our mayor Aug. 23, 2022
Who Are the Petrosyants Brothers? Eric Adams’s friends are also the city’s most unconventional restaurant power brokers.
By Aaron Short
openings Aug. 22, 2022
A ‘Modern New England’ Tasting Counter Is Headed to Dumbo Pearl Street Supper Club will debut next week.
By Alan Sytsma
More Stories