One of these things is not like the other. Bring on the ammonium hydroxide! Photo: Corbis

For many, Mondays are meatless. Read on here, and you’ll probably end up adding Tuesdays through Sundays. While the horse meat scandal continues to expand in Europe and more and more schools and retailers and restaurants who could have sworn they were serving beef find out that they weren’t, it’s become clear that once added to a food system, counterfeit meat can really have legs, in addition to what are purportedly shanks and trotters. So keep a close eye on your rump roast: Here are some of the worse mystery-meat substitutions from the last few years.

• Shady humped zebu cattle instead of graded and inspected domestic beef. Twenty percent of samples taken from 40 bars and restaurants in southwest Britain in 2008 were found to be mislabeled. In many cases, South American or meat from Botswana was sold as English beef.

• Cane rat was sold as bush meat. It happened in a London market.

• Pig blood was passed off as duck blood. In China, duck blood is congealed and made into a pudding. Supplies are sometimes bolstered by cheaper pig’s blood that has been treated with chemicals to make it taste more like the real thing. It also acts as a preservative.

• Cheap beef instead of halal lamb. In 2010 in Glasgow, several halal butchers were raided after if was discovered many of them were selling illegal meat.

• Decomposing lambs’ brains, cows’ muzzles, smoked hides, gizzards, goat parts, and loads of cows’ feet were sold as lunch. Police raided a rat-infested East London warehouse in 2003 and discovered more than 30 tons of rotting meat that was destined to be chemically treated, rendered, and introduced “into the human food chain.” The meat was said to be headed for “halal butchers and Afro-Caribbean outlets.”

• Latin American buffalo instead of prime, well-pedigreed beef. After outlawing Polish imports to Russia altogether in 2005, the two countries came to a trade agreement, but in 2007, Russian authorities announced in that 20 percent of all meat that arrived in the first quarter of that year was fraudulent to some degree. “In particular,” Interfax reported, “buffalo meat brought in from Latin America already had fake European veterinary certificates and was marked as high-quality beef of well-known Polish and European producers.”

• Mercury-tainted dolphin instead of whale meat. It happened in Japan, where they shouldn’t be eating either.

• Carabeef instead of beef. Thousand of tons of water buffalo was passed off as cow in the Philippines. 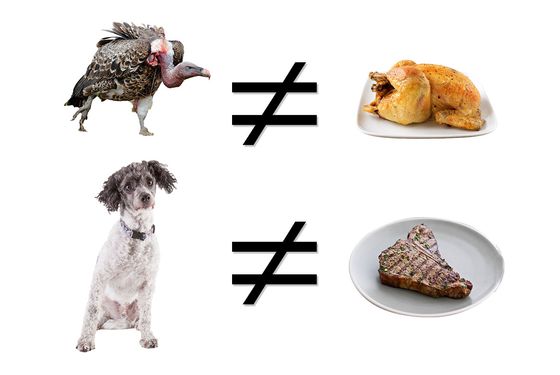 • Giant, sickly snails instead of fancy-pants escargot. Consider the Giant African land snail. Found in Nigeria, these guys are both jumbo and invasive, which sounds ready-made for an ethical substitution for European land snails, except for the fact that the snails on steroids can sometimes cause meningitis.

• Hunks of putrid, rotten meat instead of pork shanks. It happened in Chongqing, where old mystery meat was soaked in vats of nitrite and hydrogen peroxide and then “stitched to pork hide” to pass it off as the real thing.

• Pork itself may have infiltrated your hamburgers, too. Everyone keeps talking about horse, but don’t forget the Food Safety Authority of Ireland found pig DNA in 85 percent of the hamburger patties they tested back in January.

• Vulture meat instead of chicken. That grilled “chicken” you picked up in Port Harcourt, Nigeria, might very well be a bird of prey.

• Heavily disguised duck instead of beef and mutton. In Liaoyang, authorities discovered more than 40 tons of counterfeit meat earlier this month.

• Dyed pork passed off as filet mignon. Last year, a Swedish wholesaler reported taking delivery on a large shipment of “beef” from Hungary that turned out to be thousands of pounds of raw pork loins treated with food coloring to make it look like raw beef. In all, almost 4,000 tons of the doctored pork, which cannot be served rare or raw like beef, was removed from supermarket shelves in Sweden, but that’s not before it was suspected to have been sold elsewhere. At least one batch of counterfeit meat was traced to Argentina, but the trail went cold.

• Duck mixed with fertilizer as “New Zealand Lamb Chops Grade A.” It’s amazing what you can do with a little ammonium chloride, some food coloring, and some meat tenderizer.

• Beef top round instead of mutton. In Singapore, five butchers and vendors have been busted for making the switcheroo in the last four years.

• Chemically burned pork in place of beef. All it takes is a little “beef extract” and some creativity, it seems. This allegedly happens in Shanghai, where pork is much cheaper than beef.

• Illegal deer meat from northern New Jersey may have made it into some blue plate special chili at area diners. While authorities have announced they could not find evidence that Mark Jarema sold fresh-killed deer to restaurants in Raritan and Belmar after using his girlfriend’s head as a gun rest during his impromptu hunting expeditions, they do know he killed several deer, butchered them in his girlfriend’s mom’s basement, and sold the meat. “We weren’t able to make further connection to restaurants,” police said last week, “because by the time we were informed of the potential sale, months had passed and it would have been impossible to link the sale to the restaurant.” Also, one of those restaurants has closed.

• Donkey meat instead of beef. In South Africa, 99 out of 139 samples taken from “beef” burgers and sausages returned varying levels of donkey, buffalo, pork, chicken, and goat. And that happened today.

20 Examples of Counterfeit Meats That Are Way Grosser Than Horse

openings 8:00 a.m.
Every Pastry at the New K’Far in Brooklyn Oversize rugelach, pistachio sticky buns, and bourekias inspired by TGI Friday’s spinach dip.
By Joshua David Stein
presentation Yesterday at 8:55 a.m.
The New Minimalism Chefs are leaning into spare, simple plates.
By Chris Crowley
rip Dec. 5, 2022
Alain Sailhac, a Chef’s Chef to the End, Has Died “He knew it all.”
reasons to love new york Dec. 5, 2022
The Best Pizza in the World Can Be Found in One Square Mile of Williamsburg Any neighborhood would be lucky to have even one or two of these places. Here are eight.
reasons to love new york Dec. 5, 2022
Margaritaville Is the Chillest, Cheesiest Place in Town It’s bright, cacophonous fun.
By Rebecca Alter
reasons to love new york Dec. 5, 2022
We Will Wait a Very Long Time for a Suprême The latest and arguably greatest entry in New York’s croissant craze.
the grub street diet Dec. 2, 2022
Andy Baraghani Likes Some Lumps in His Potatoes “This recipe has three kinds of dairy — labneh, cream, and butter — which I don’t think is overkill.”
By Alan Sytsma
the year i ate new york Dec. 1, 2022
Chocolate and Cheese in the Bronx A post-Thanksgiving trip to Chocobar Cortes.
By Tammie Teclemariam
report Dec. 1, 2022
How New Yorkers Are Saving, Swapping, and Splurging on Groceries “You gotta close your eyes and put it in the cart.”
By Paula Aceves and Jane Starr Drinkard
moving Nov. 30, 2022
The Famously Tiny I Sodi Is Moving to Bigger Digs Rita Sodi’s beloved little dining room will move — and finally get a bit bigger.
openings Nov. 29, 2022
The Many Influences of Kwame Onwuachi The chef puts his own history on the menu at Tatiana.
By Tiffany Martinbrough
best in class Nov. 28, 2022
11 of the Very Best Air Fryers Custard toast at the ready.
feature Nov. 28, 2022
This Tasting Menu Tastes Like Pot A cross-country dive into high-flying, super-high dollar cannabis cuisine.
By Adam Platt
emergency discussion Nov. 22, 2022
The Menu Gets That Fine Dining Is a Cult Obscure location, insufferable clientele, and staff at the end of their rope — this horror-comedy’s got a lot in common with reality.
By Chris Crowley and Adam Platt
holiday gifts 2022 Nov. 21, 2022
The Best Gifts for Beer Lovers, According to Brewers and Beer Lovers Because you can do better than a novelty beer helmet.
profile Nov. 21, 2022
Scarr’s Pizza Is Expanding — and Adding a Sushi Counter How Scarr Pimentel became Orchard Street royalty.
By Tammie Teclemariam
the grub street diet Nov. 18, 2022
Jeremiah Moss Wishes Arturo’s Would Open Earlier “I feel like I’m betraying myself somehow when I eat nice food.”
By Alan Sytsma
the year i ate new york Nov. 17, 2022
Where to Watch the World Cup Our diner-at-large goes looking for that perfect 5 a.m. sports bar.
By Tammie Teclemariam
closings Nov. 15, 2022
Good-bye to Pearl, the Oyster Bar That Launched a Million Lobster Rolls “A perfect storm” of calamities led to the restaurant’s closing, according to owner Rebecca Charles.
By Steve Garbarino
openings Nov. 14, 2022
The Race to Finish Rockefeller Center’s Restaurants A handful of ambitious new spots are all vying for the attention of, well, everyone.
By Chris Crowley
More Stories