“Guy Fieri didn’t register his restaurant’s domain name,” a Brooklyn-based programmer named Bryan Mytko tweeted yesterday, “so I picked it up. I think this new menu look great.” Indeed. The fake menu that’s now parked proudly at the spoof site Guy’s American Kitchen and Bar now proudly offers “Panamania!,” a boisterous entrée of deep-fried snake that comes with a “a printed out picture of David Lee Roth stapled on it and a sparkler sticking out of each eye,” not to mention a “side of Bud Light you have to wring out of a Hawaiian shirt.” It’s sort of like the greatest thing ever. Also, it’s a little more than depressing. 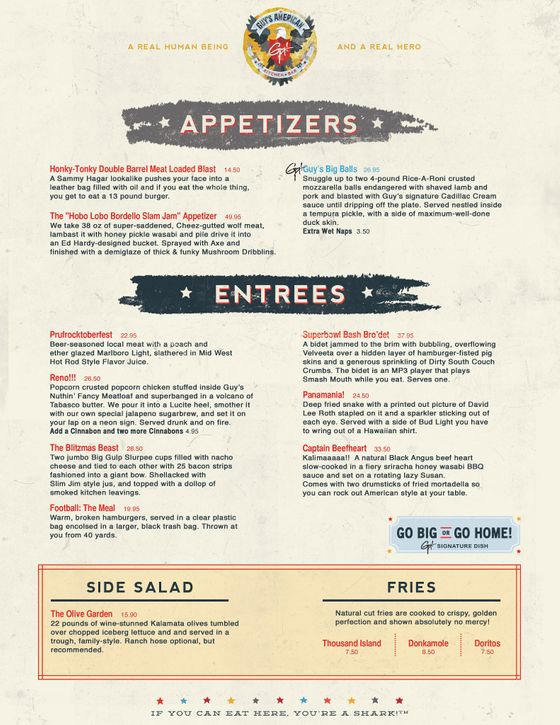 The genius of the menu, which has been tweeted more than 5,100 times since yesterday afternoon and even reached Anthony Bourdain in Montreal, is that it looks just like the real thing, and it’s most funny when it’s hardest to distinguish the genuine Fieri from the fake. What’s the difference, after all, between “Honky-Tonky Double Barrel Meat Loaded Blast” and “Motley Que Ribs”?

Mytko’s site had barely made the rounds when nitpickers on Twitter started pointing out that a very large amount of the food items and the parody menu’s jokes had been lifted from other sources. So, not funny. Doesn’t he know there are thousands of semi-employed writers out here already who are trying to make an honest dollar by ridiculing Guy Fieri? “This has been a blast,” he tweeted. “I had no idea the stuff was theirs so just giving credit.” He stepped down.

Original or not, the menu is funny. In terms of commentary, on the other hand, Mytko’s dummy site is sort of like his Not Another Teen Movie in relation to Pete Wells’s Breakfast Club of a takedown. It’s really just a reminder of how hard it is to write a truly effective negative restaurant review. Also, because there’s already a Behind the Music–worthy exegesis of how content for a fake restaurant website was created and uploaded less than 24 hours after it was uploaded, it’s perhaps the best sign yet that we all need to slow down for a second and chew our food for just a little bit longer.

talking to Yesterday at 10:55 a.m.
Welcome to the New York Nicoverse Grabbing sandwiches with Nicolas Heller and his band of unlikely food influencers.
By Jason Diamond
what to eat June 27, 2022
A Lovely New Salad That’s Also Pure Garbage At Patti Ann’s, the garbage salad takes equal inspiration from Chicago steakhouses and French fine dining.
By Alan Sytsma
the grub street diet June 24, 2022
Dog Researcher Alexandra Horowitz Consumes ‘Prodigious’ Amounts of Fruit “A mealy peach is an insult to the mouth.”
By Rachel Sugar
lawsuits June 23, 2022
The Bellucci’s Pizza Battle Is Headed to Court The owner of Bellucci Pizza has sued Andrew Bellucci.
photo essay June 23, 2022
Inside the Lesbian Dance Party That Spills Out Onto Bushwick’s Streets “Everyone feels so good.”
By Megan Paetzhold
the year i ate new york June 23, 2022
Where to Find Not-So-Hidden Jazz in Midtown East Does anyone go north of 40th Street after 9 p.m.?
By Tammie Teclemariam
best in class June 22, 2022
13 of the Very Best Water Bottles Always be hydrating.
By Emma Wartzman
closings June 22, 2022
Fleishers, the Original ‘Rock Star Butcher,’ Has Closed For Good The company went from artisanal darling to dead meat in less than a year.
By Caleb Pershan
openings June 21, 2022
The Brooklyn Takeout Joint That Got Its Start on Thai Tinder “We’re just a little grenjai.”
By Leah Bhabha
openings June 17, 2022
Drinks Are Flowing Again at Fort Defiance The Red Hook local has its liquor license and a newly opened back bar.
the grub street diet June 17, 2022
Chef Ayo Balogun Celebrates With Pancakes and Coca-Cola “It’s like my own Champagne — we bust out the Coca-Cola”
By Rachel Sugar
openings June 16, 2022
Inside Yun Hai, a New Shop Dedicated to the Bounty of Taiwan The general store opens in Williamsburg this weekend.
By Chelsea Peng
the year i ate new york June 16, 2022
How I Celebrated My James Beard Award Luxury Cheetos, a stop in Ohio, and three perfect diner tacos.
By Tammie Teclemariam
interview June 15, 2022
Meet the Man Who’s Selling Beer at Every Big-League Ballpark in America Reginald Duvalsaint would really like to give you a Bud.
exits June 15, 2022
Our Restaurant Critic Says Good-bye After 22 years and one zillion meals, it’s time to move over.
By Adam Platt
father's day 2022 June 14, 2022
The Best Gifts for Foodie Dads Foolproof ideas for the dad who says the quickest way to his heart is through his stomach.
awards June 14, 2022
Here Are the Winners of the 2022 James Beard Foundation Awards It was the first ceremony since the pandemic began.
By Chris Crowley
restaurant review June 13, 2022
Nudibranch Displays an Accomplished Sense of Personal Style Soba and so much more.
By Adam Platt
the grub street diet June 10, 2022
Alex Edelman Is Trying to Find His Breakfast Routine “I congratulated myself mid-prep for being so adult and responsible.”
By Alyssa Shelasky
groceries June 9, 2022
It Is Time to Start Hoarding Sriracha Again Huy Fong announced it has halted production because of a “severe” chili-pepper shortage.
More Stories