Have it your way. Photo: fsmikey/Twitter

“We just got sold to McDonalds! Look for McDonalds in a hood near you,” announced a chipper tweet sent earlier today from the official Burger King Twitter account, suggesting that the two fast-food giants had crossed their hamburger streams and merged into some unholy megachain where employees shoot heroin and snort crushed-up Percocets in the bathrooms, rapper Gucci Mane has knocked off Grimace, Chief Keef is a now patron saint/Fry Guy, and a free gram of bath salts comes with the purchase of every Big Mac. Up until a few minutes ago, the chain’s banner read, “BURGER KING® USA official Twitter account. Just got sold to McDonalds because the whopper flopped =[ FREDOM IS FAILURE℠” And because it’s a national holiday, the hack went on for more than an hour, and responsibility has been vaguely claimed by an Anonymous-affiliated hacker. On the plus side, the chain now has more than 23,000 new followers, up from 82,000 this morning to its current 105,000. The account has been suspended, but screenshots of some of the high jinks are straight ahead. 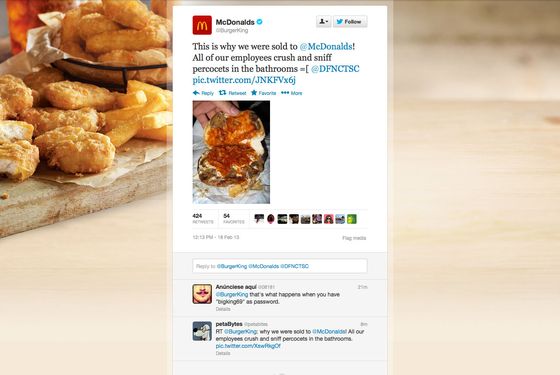 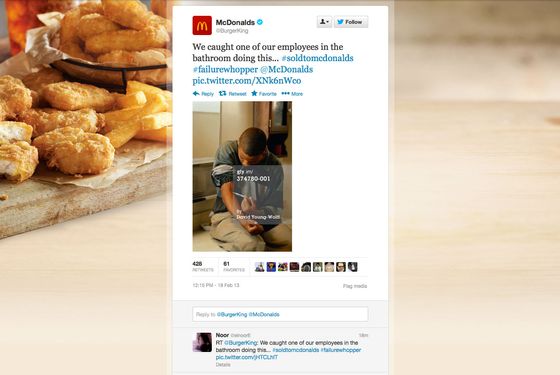 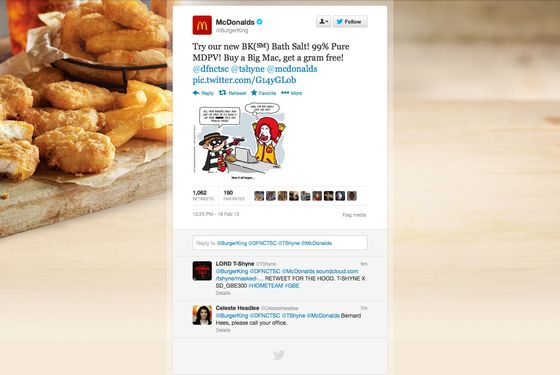 Bath salts are like flavor crystals, only much less flavorful.Photo: BurgerKing/Twitter

what to eat 12:14 p.m.
Meet Brooklyn’s Newest Vegan Meatball Hero Garden Carver specializes in meat-free versions of beloved comfort foods.
By Megan Paetzhold
the grub street diet Aug. 5, 2022
Filmmaker Rebeca Huntt Is Serious About Breakfast “I made my oatmeal pancakes and watched Before Sunrise.”
By Alan Sytsma
the year i ate new york Aug. 4, 2022
Not All Culinary Journeys Can End in Success Sometimes you travel for a dish with a perfect online rating — and then you have to take your L in stride.
By Tammie Teclemariam
what to eat Aug. 3, 2022
How to Engineer a Clam Slice In a stunning bit of pizza innovation, F&F offers the New Haven specialty one piece at a time.
By Chris Crowley
reopenings Aug. 2, 2022
Txikito Is Back — Finally The neighborhood favorite is set to reopen after two-plus years of darkness.
By Charlotte Druckman
food tv Aug. 1, 2022
Everyone’s Thirsty for The Bear. Here’s What It’s Really Like to Date a Chef. “We all get into this line of work because we have personality disorders and massive daddy issues.”
By Nastassia Lopez
the grub street diet July 29, 2022
Sarah Thankam Mathews Eats Lychees on the Beach “I feel a happiness so intense and sudden it leaves me gelatinous.”
By Rima Parikh
openings July 28, 2022
He Has 11 Million TikTok Followers. Now He’s Throwing Ice Cream in Noho. “If you walk in and there is ice cream flying around in the air? It automatically sends the energy level up.”
By Ella Quittner
the year i ate new york July 28, 2022
Swimming With the Regulars at Marea An extravagant weeknight meal where everyone seems to know each other.
By Tammie Teclemariam
are u coming? July 27, 2022
A Tea-Spilling Lawsuit Upends a Hell’s Kitchen Gay Club Just how woke can a megaclub hosting underwear parties really ever be?
By Brock Colyar
field notes July 27, 2022
A Final Trip to Papaya King on the Eve of Its Likely Destruction The iconic hot-dog counter’s days appear numbered.
By Adam Platt
openings July 26, 2022
Cocktail Royalty Rolls Into New York A version of the fabled Dukes martini is now being poured at the Hotel Chelsea’s Lobby Bar.
By Robert Simonson
talking to July 25, 2022
Separating Fact From Fiction in Despot’s New York A trip to Spaghetti Park with the city’s premier underground rapper turned empire-building restaurateur.
By Chris Crowley
saw something said something July 25, 2022
We Admired, Then Tracked Down the Jars in HAGS’s Bathroom The new East Village restaurant put an unusual level of detail into its restroom.
the grub street diet July 22, 2022
Jacqueline Novak Prefers the Big Bags of Chips “This all goes back to the source bag, the Tostitos bag of my youth, humongous, the size of my torso.”
By Alan Sytsma
the year i ate new york July 21, 2022
Who Makes the Best Chicken Caesar Wrap in New York? LunchTok inspires our diner-at-large to find the answer.
By Tammie Teclemariam
door city over here July 20, 2022
The Alligator Lounge Is a Nathan Fielder Bar Now Thanks to The Rehearsal, the Williamsburg bar is now home to “the Dumb Starbucks of trivia nights.”
By Rebecca Alter
talking to July 20, 2022
Romy Gill Makes Her Own Luck “Anybody in their right mind would’ve given up.”
By Charlotte Druckman
commentary July 19, 2022
The ‘World’s 50 Best Restaurants’ List Is More Ridiculous Than Ever Whose interests do these rankings still serve?
By Alan Sytsma
closings July 18, 2022
NYC Soup Culture Experiences Major Setback As Hale and Hearty Closes Locations The New York chain has reportedly gone dark under mysterious conditions.
More Stories