The greatest boxing promoter of all time — who worked with Muhammad Ali, Mike Tyson, George Foreman, Julio César Chávez, Evander Holyfield, and Larry Holmes — has now turned his attention to Top Chef, of all things. Don King says that, at 81, his interests in cooking and food are deepening, and as a regular watcher of Bravo’s cooking competition, he feels that chef Josie Smith-Malave was “unjustly” booted at the end of last week’s episode, and he’s now enlisting the public to get her voted back so she can cook her way through the final rounds. Grub Street spoke with King yesterday afternoon as he waited to board a flight in Cleveland back to his home in Florida.

What does chef Josie mean to you?
Well, America means a lot to me, and chef Josie is a part of Americana, you know, and these are the people who count: They say what they mean, mean with they say. Because of this, sometimes what they say and how they say it is not taken they way people may like it. Shakespeare says it even better: “Trifles light as air are to the jealous confirmations strong as proofs of holy writ.” So it may be a little jealously there, something that’s outside the realm of cooking, because chef Josie is a fabulous cook.

Her approach to fried chicken on last week’s episode was an issue.
Yet they tell me her fried chicken is second-to-none. In the black community, fried chicken is known as the “Gospel Bird,” you know what I mean, so I wrote a little ditty for her. I say:

That’s lovely. And now you’re asking people to vote to bring Josie back on the show with the “Save a Chef” thing?
People have to vote! They have to vote on Twitter with #savechefjosie. They have to text it in. I think the number is 27286.

It is.
[Laughs.] You can dig all that computer stuff out, but I’ve got to tell you like it is. Her chicken is awesome. And eating her fried chicken, they tell me, is a religious experience. It’s something awesome. 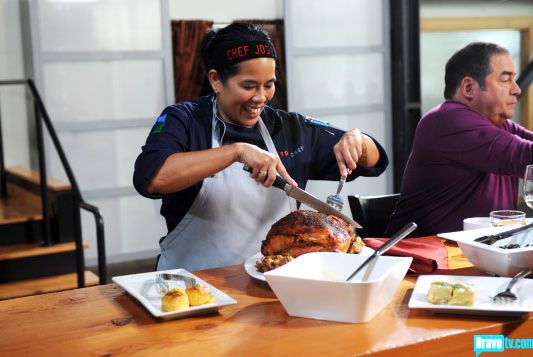 I hear you want to open a fried-chicken restaurant with her.
Lemme tell you something. I believe in America. I believe in American dreams, and I think she’s got a good team. Chef Josie’s team makes America’s dreams. You know what I’m saying? This is what you’ve have to do. There ain’t no I in team. That’s T-E-A-M; that’s on the B-E-A-M. If you deal with that — whether it’s I-I-I, we, the me-me-me, or the we and us — that’s when you start to lose sight of the forest for the trees. So we may get chef Josie, I’ll make it come together, and in so doing, we’ll open up and serve the hearts and the stomachs of all Americans; every creed, race, color, and religion.

Okay. Do you really love Top Chef?
Yes! It’s on Bravo. You know what I mean? Top Chef is on Bravo, but you know, let me tell you, it’s like sports, it’s like fighting, and boxing is like life. You get knocked down, you get back up, you brush yourself off, and you get back in there, and all your problems end there before you. You can’t put if off to the next day. You can’t send in a substitute. If you run out of gas, there ain’t no gas station in sight. Well, cooking is like life. Because you eat, and eating is nourishment for the body, it keeps you functioning, it gives you strength to get through the footrace of life, so you can stand up and be accounted for. Because if you don’t stand for something, you don’t live for nothing.

You should be a guest judge on the show.
I think that would be great.

So, clearly, you think chef Josie should get back on the show and win Top Chef.
I think she should win Top Chef. I think she should have the opportunity to win Top Chef. Injustice anywhere is a threat to justice everywhere. That’s what Dr. Martin Luther King said. She was kicked unjustly off the show, so let us rectify that, not by pointing fingers and blame and accusing this one and that one, but by going to the Twitter and sending out the tweets, and going to the text and sending out the texts. You know, let’s see chef Josie. That’s all we want, all the viewers everywhere to cast the vote, cast that franchisement, let us have the enjoyment of chef Josie and her Gospel Bird, her fried chicken, her cooking.

You said it’s not about pointing fingers. But is there someone on the show that should have been eliminated instead in chef Josie’s place?
You have to come after she’s back on the show. Instead of condemning anyone else, let her cooking be the judge. If chef Josie can cook the way that everyone says she does, and her fried chicken is a religious experience, then put her back in, give her the opportunity. When the thing is over, then you can ask that question, but oh then, we’re going to be sensationalizing at the expense of someone else, and she’s the victim of that right now. We’re trying to do what is right. I say, “good food, good meat, good God, let’s eat.”

presentation 8:55 a.m.
The New Minimalism Chefs are leaning into spare, simple plates.
By Chris Crowley
rip Yesterday at 12:45 p.m.
Alain Sailhac, a Chef’s Chef to the End, Has Died “He knew it all.”
reasons to love new york Yesterday at 8:00 a.m.
The Best Pizza in the World Can Be Found in One Square Mile of Williamsburg Any neighborhood would be lucky to have even one or two of these places. Here are eight.
reasons to love new york Yesterday at 8:00 a.m.
Margaritaville Is the Chillest, Cheesiest Place in Town It’s bright, cacophonous fun.
By Rebecca Alter
reasons to love new york Yesterday at 8:00 a.m.
We Will Wait a Very Long Time for a Suprême The latest and arguably greatest entry in New York’s croissant craze.
the grub street diet Dec. 2, 2022
Andy Baraghani Likes Some Lumps in His Potatoes “This recipe has three kinds of dairy — labneh, cream, and butter — which I don’t think is overkill.”
By Alan Sytsma
the year i ate new york Dec. 1, 2022
Chocolate and Cheese in the Bronx A post-Thanksgiving trip to Chocobar Cortes.
By Tammie Teclemariam
report Dec. 1, 2022
How New Yorkers Are Saving, Swapping, and Splurging on Groceries “You gotta close your eyes and put it in the cart.”
By Paula Aceves and Jane Starr Drinkard
moving Nov. 30, 2022
The Famously Tiny I Sodi Is Moving to Bigger Digs Rita Sodi’s beloved little dining room will move — and finally get a bit bigger.
openings Nov. 29, 2022
The Many Influences of Kwame Onwuachi The chef puts his own history on the menu at Tatiana.
By Tiffany Martinbrough
best in class Nov. 28, 2022
11 of the Very Best Air Fryers Custard toast at the ready.
feature Nov. 28, 2022
This Tasting Menu Tastes Like Pot A cross-country dive into high-flying, super-high dollar cannabis cuisine.
By Adam Platt
emergency discussion Nov. 22, 2022
The Menu Gets That Fine Dining Is a Cult Obscure location, insufferable clientele, and staff at the end of their rope — this horror-comedy’s got a lot in common with reality.
By Chris Crowley and Adam Platt
holiday gifts 2022 Nov. 21, 2022
The Best Gifts for Beer Lovers, According to Brewers and Beer Lovers Because you can do better than a novelty beer helmet.
profile Nov. 21, 2022
Scarr’s Pizza Is Expanding — and Adding a Sushi Counter How Scarr Pimentel became Orchard Street royalty.
By Tammie Teclemariam
the grub street diet Nov. 18, 2022
Jeremiah Moss Wishes Arturo’s Would Open Earlier “I feel like I’m betraying myself somehow when I eat nice food.”
By Alan Sytsma
the year i ate new york Nov. 17, 2022
Where to Watch the World Cup Our diner-at-large goes looking for that perfect 5 a.m. sports bar.
By Tammie Teclemariam
closings Nov. 15, 2022
Good-bye to Pearl, the Oyster Bar That Launched a Million Lobster Rolls “A perfect storm” of calamities led to the restaurant’s closing, according to owner Rebecca Charles.
By Steve Garbarino
openings Nov. 14, 2022
The Race to Finish Rockefeller Center’s Restaurants A handful of ambitious new spots are all vying for the attention of, well, everyone.
By Chris Crowley
the grub street diet Nov. 11, 2022
Margo Price Stops for Tacos in Texas and Katz’s in New York “Tonight we might get stoned and go eat a hot dog.”
By Alan Sytsma
More Stories