There’s a lot going on in that little tin. Photo: Melissa Hom

When you think of Old Bay — the Maryland spice blend in the yellow and blue tin — you probably think of outdoor crab shacks on the Chesapeake Bay, or maybe a lobster bake on a beach. But there’s nothing inherently summery or regional about the blend itself, other than how well it goes with a cold pitcher of Natty Boh. Chefs seem to have realized that. Mission Chinese’s Danny Bowien has used it in a dish of Sichuan catfish; the Momofuku group famously seasons their fried chicken with it; plenty of places sell Old Bay–dusted fries and burgers with Old Bay–infused aïoli — the list goes on and the reason is obvious: Old Bay’s transformative powers extend way beyond crabs.

The mix was first put together in the forties by a German immigrant named Gustav Brunn. The precise ingredient makeup is, like Coke’s formula or KFC’s eleven herbs and spices, one of those tightly guarded corporate secrets, but the ingredients listed on the package are celery salt, “spices (including red pepper and black pepper),” and paprika. Anyone who’s tasted it can tell you there’s a lot more than that in the mix. I’d bet bay leaf, clove, allspice, dried mustard, ginger, and cardamom are all in there, too, layering and rounding the overall flavor.

The final blend is one of those Heinz-like products that manages to nail all of the various taste sensations — salty, sweet, umami, etc. — that everyone loves. Go ahead and try dusting your fries with another spice blend like Zatarain’s — it won’t be the same (even if spice giant McCormick does own both brands).

So it’s no wonder that chefs put Old Bay to work to make all sorts of things taste better. In fact, when I sat down to think about new ways to use the tin of Old Bay that was already in my pantry, I realized I had a lot of options.

Pork larb, the Northern Thai meat salad — served with lettuce leaves and rice — utilizes a vivid combination of spices and herbs, many of which you can’t get here. Andy Ricker can get them and you can taste the exotic mix in his larb at Pok Pok, but his life would be a lot easier if he just subbed in some Old Bay, which is what you should do at home.

Buffalo steaks are available at most grocery stores these days and have a milder flavor than beef. They’re better for you (much less fat) but could stand a flavor boost in the form of a dry rub. Enter Herr Brunn’s special seasoning.

And finally, just to make sure I didn’t totally ignore Old Bay’s classic appeal, there’s beer-steamed shrimp with Old Bay remoulade. You can even use Natty Boh to cook the shrimp. 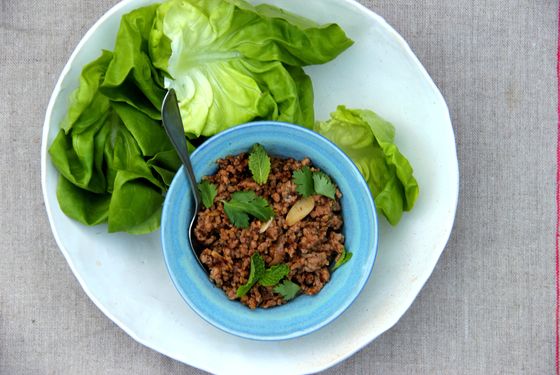 No matter how you spell it — larb, laab, laap, or lahb — Old Bay is a novel inclusion.Photo: Ian Knauer

Heat the oil in a large heavy skillet over medium high heat until hot, then stir in the shallots, ginger, lemongrass, and garlic and cook, stirring, until they start to brown, about 5 minutes.

Stir in the pork, breaking up any lumps with a spatula and cook, stirring, until pork is cooked through, about 6 minutes. Stir in the fish sauce and old bay and cook until liquid is almost evaporated, 3 to 4 minutes. Stir in the lime juice and transfer larb to a serving bowl. Sprinkle with cilantro and mint. 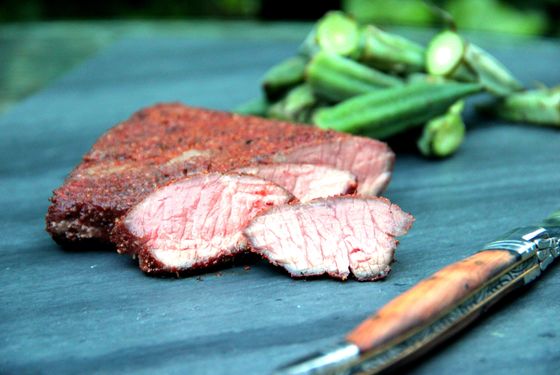 The spice rub is also great on ribs.Photo: Ian Knauer 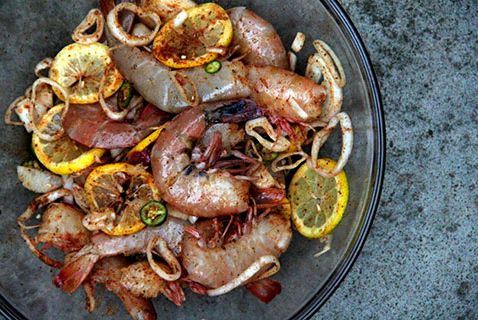 Whisk together all the remoulade ingredients and set aside until ready to use.

Toss the shrimp with the lemon, shallot, chile, and Old Bay, then let marinate at room temperature for 30 minutes.

Bring beer and vinegar to a boil in a heavy pot fitted with a steamer basket and lid, then add shrimp mixture and steam until shrimp are just cooked through, 3 to 5 minutes.

Transfer shrimp to a serving platter and drizzle with 1/2 cup beer mixture. Serve shrimp with remoulade.

the underground gourmet Feb. 6, 2023
A Tasting Menu That Ends With Plenty of Leftovers Bird Dog offers the most useful luxury of all.
By Tammie Teclemariam
best in class Feb. 3, 2023
16 of the Very Best Water Bottles Always be hydrating.
By Emma Wartzman
the grub street diet Feb. 3, 2023
Novelist Xochitl Gonzalez Always Has Capers on Hand “Capers are your bitchy friend who can’t keep their mouth shut.”
By Emma Alpern
problem solving Feb. 2, 2023
Everything You Need to Know About Tipping Right Now 15 to 20 percent isn’t going to cut it anymore.
look book Feb. 2, 2023
The Look Book Goes to Tatiana  A recent Wednesday night at chef Kwame Onwuachi’s consistently booked Lincoln Center restaurant.
drinks Feb. 1, 2023
Via Carota Is Launching Its Own Bottled Cocktails Negronis, Manhattans, and espresso martinis that are ready for your home bar and your TikTok feed.
By Chris Crowley
the underground gourmet Jan. 31, 2023
Italian Beef So Good You’ll Forget About The Bear The sandwiches at Bobbi’s stand out on their own terms.
By Tammie Teclemariam
gifts they might actually want Jan. 30, 2023
The Best Gifts for Beer Lovers, According to Brewers and Beer Lovers Because you can do better than a novelty beer helmet.
field notes Jan. 30, 2023
The Tin Building Has Everything (Except a Purpose) Jean-Georges Vongerichten’s lovely but lifeless $200 million food hall.
By Adam Platt
the grub street diet Jan. 27, 2023
Sylvan Esso’s Amelia Meath Wants the Weird Appetizers “If there’s a bad app, I’ve gotta try it.”
By Alan Sytsma
the year i ate new york Jan. 26, 2023
The Hotpot Haze of Haidilao A steamy, celebratory feast in Flushing.
By E. Alex Jung
news Jan. 25, 2023
Here Are the Semifinalists for the 2023 James Beard Foundation Awards New York is well represented by Department of Culture, Kru, and more.
groceries Jan. 25, 2023
Welcome to the Shoppy Shop Why does every store suddenly look the same?
By Emily Sundberg
the underground gourmet Jan. 23, 2023
Now Is the Time for Trini Roti The Caribbean staple is a perfect midwinter lunch.
By Tammie Teclemariam
the grub street diet Jan. 20, 2023
Kashana Cauley Will Drive an Hour for the Right Yogurt “I believe in good yogurt more than other people believe in God.”
By Zach Schiffman
conversations Jan. 18, 2023
The Rush to Call Fine Dining’s Death Does Noma’s closing announcement really mean other restaurants are doomed?
By Chris Crowley, Alan Sytsma, and Tammie Teclemariam
top story Jan. 17, 2023
Restaurant Workers Are Paying to Keep Their Own Wages Low The National Restaurant Association lobbies Congress to keep the minimum wage low. Revenues from food-safety courses help pay for that.
the underground gourmet Jan. 16, 2023
Where to Find the City’s Best New Soup Elaborate broth is back.
By Tammie Teclemariam
the grub street diet Jan. 13, 2023
Highsnobiety’s Willa Bennett Is Thinking About Her Overnight Oats “I’ve never tried to make the oats while I’m away. It wouldn’t be the same.”
By Zach Schiffman
best in class Jan. 12, 2023
12 of the Very Best Air Fryers Custard toast at the ready.
More Stories