On October 25, New York will release the In Season cookbook by food editors Rob Patronite and Robin Raisfeld. In addition to more than 150 recipes from chefs such as April Bloomfield, Damon Wise, Jonathan Waxman, and Andrew Carmellini, the book also features essays by Mario Batali, David Chang, Anita Lo, and Michael Anthony. In fact, to give you a sense of what to expect, you’ll find Anthony’s introduction to fall, as well as his recipe for purple majesty potatoes — both of which are right from the book — straight ahead.

As a cook, I feel anticipation and rebirth through spring and exuberant celebration in summer, but my favorite season, autumn, brings on a contemplative reverence. Fall continues what the heat of summer put in motion: the explosion of peppers, tomatoes, eggplant, corn, beans, berries, cucumbers. The Harvest! There is balance in the air. The intensity of the sun fades and provides those perfectly long days that begin and end in coolness. We cook with a feeling of abundance.

As fall progresses, the moon grows bright and we get a glimpse of sadness, a need for comfort, an uncertainty in the air, a warning that this won’t last forever. One last bite that might be the best of the year since we know it will be another twelve months until we can taste that flavor again.

Plants slow down their growth and the days get shorter through this transition. Mud replaces dust. This triggers an innate reaction in plants and cooks to store things — pickled, salted, smoked, and preserved. We turn to foods that are beautifully sun drenched with golds, oranges, and crimsons and are protected by heavy skins and earth. Pumpkins of all sizes, associated with demons, hide in the fields. Apples and pears weigh down tree branches; some varieties have been here for ages while others have come from the belief that “creativity means not copying.”

In this season, as soon as I feel the first cool winds and smell a little smoke in the air, something triggers my sense of home and I find myself searching for a fire. At last, Gramercy Tavern brings me to hearth and home. —Michael Anthony, executive chef/partner, Gramercy Tavern 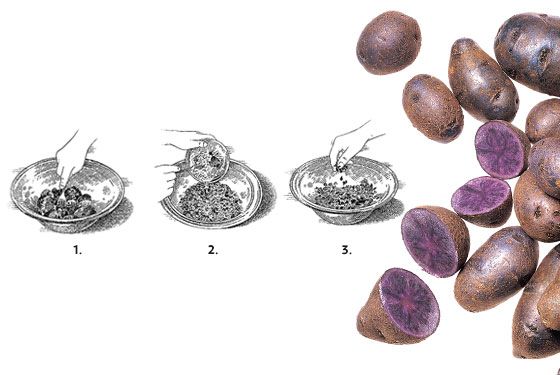 Purple Majesty Potatoes
Not only does the Purple Majesty come in a shade of violet so striking that even Prince would say it is a bit much, it’s also really good for you. The potato was developed in 2006 by Colorado growers using natural cross-breeding techniques that somehow resulted in a superspud containing freakishly high amounts of antioxidants. They’re great fried, but Gramercy Tavern’s Michael Anthony recommends a simple method inspired by a guest-chef visit from the late, great Bernard Loiseau. The backstory: At first, Anthony couldn’t believe that Loiseau had traveled all the way from France to crush potatoes with a fork. But when he saw the intensity with which the Frenchman approached his task, and how much attention he lavished on such a humble ingredient, it won him over. A smashing tip: never overwork the potatoes; use a crushing, not a mixing, motion.

In a large pot, cook potatoes with skins on in heavily approximately 15 minutes. Remove potatoes from pot, and peel them while still warm. Place potatoes in a large bowl and, using a fork, gently smash them, maintaining a fairly chunky consistency. Fold in minced shallots, lemon juice, olive oil, fleur de sel, and white pepper. Finish with parsley. Serves 4.

openings Yesterday at 9:25 a.m.
The Many Influences of Kwame Onwuachi The chef puts his own history on the menu at Tatiana.
By Tiffany Martinbrough
best in class Nov. 28, 2022
11 of the Very Best Air Fryers Custard toast at the ready.
feature Nov. 28, 2022
This Tasting Menu Tastes Like Pot A cross-country dive into high-flying, super-high dollar cannabis cuisine.
By Adam Platt
emergency discussion Nov. 22, 2022
The Menu Gets That Fine Dining Is a Cult Obscure location, insufferable clientele, and staff at the end of their rope — this horror-comedy’s got a lot in common with reality.
By Chris Crowley and Adam Platt
holiday gifts 2022 Nov. 21, 2022
The Best Gifts for Beer Lovers, According to Brewers and Beer Lovers Because you can do better than a novelty beer helmet.
profile Nov. 21, 2022
Scarr’s Pizza Is Expanding — and Adding a Sushi Counter How Scarr Pimentel became Orchard Street royalty.
By Tammie Teclemariam
the grub street diet Nov. 18, 2022
Jeremiah Moss Wishes Arturo’s Would Open Earlier “I feel like I’m betraying myself somehow when I eat nice food.”
By Alan Sytsma
the year i ate new york Nov. 17, 2022
Where to Watch the World Cup Our diner-at-large goes looking for that perfect 5 a.m. sports bar.
By Tammie Teclemariam
closings Nov. 15, 2022
Good-bye to Pearl, the Oyster Bar That Launched a Million Lobster Rolls “A perfect storm” of calamities led to the restaurant’s closing, according to owner Rebecca Charles.
By Steve Garbarino
openings Nov. 14, 2022
The Race to Finish Rockefeller Center’s Restaurants A handful of ambitious new spots are all vying for the attention of, well, everyone.
By Chris Crowley
the grub street diet Nov. 11, 2022
Margo Price Stops for Tacos in Texas and Katz’s in New York “Tonight we might get stoned and go eat a hot dog.”
By Alan Sytsma
the year i ate new york Nov. 10, 2022
Detours and Seafood in Jackson Heights What to do when a food pilgrimage doesn’t go as planned.
By Tammie Teclemariam
scenes Nov. 8, 2022
Saturday Night at Slutty Vegan Brooklyn’s best party is a line for veggie burgers.
By Chris Crowley
grub guide Nov. 7, 2022
11 Extraordinary Pies for Thanksgiving From the city’s most exciting new bakeries.
By Charlotte Druckman
the grub street diet Nov. 4, 2022
Zosia Mamet Shares Swedish Fish With Her Horse “I ride my horse pretty much every day, and I’m terrified of getting hungry.”
By Zach Schiffman
openings Nov. 3, 2022
A Ukrainian Bar Arrives in Soho Slava opens in the former Pegu Club space.
By Robert Simonson
the year i ate new york Nov. 3, 2022
Our Diner-at-Large’s New Favorite Restaurant At Syko, stock up on meze while you grab a bulgogi fatboy for the road.
By Tammie Teclemariam
remembrances Nov. 2, 2022
A Messy, Exuberant Keeper of Both House and Head In the ebullient too-muchness of her life as she shared it with us, Julie & Julia author Julie Powell reported on it like we were her pals.
openings Nov. 2, 2022
Pizza Obsessive Anthony Mangieri Opens Caffè Napoletana On Saturday mornings, Una Pizza Napoletana will transform into an Italian coffee counter.
rip Nov. 1, 2022
Gael Greene Invented the Modern Restaurant Critic The author and longtime food writer has passed away at the age of 88.
By Adam Platt
More Stories