The design of Guy’s American Kitchen and Bar makes it clear that this 500-seat restaurant is, first and foremost, an homage to the American appetite for calories, hard liquor, and gasoline. The menu is planted with gut bombs like Guy-talian nachos and Buffalo-sauced meatloaf. A print of a red muscle car hangs on the wall; across the room there’s an old-timey advertisement for Jack Daniels. I’m here, sitting in a thickly padded red booth with Crazy Legs Conti, the country’s seventeenth ranked competitive eater. We have one simple goal: To see just how much of Guy Fieri’s menu Crazy Legs Conti can get through. Given the sheer brazen excess of the place, he seemed like the only man for the job.

In a lot of ways, Crazy Legs — competitive eater, nude model, sperm donor, part-time window-washer — might be exactly the kind of customer this restaurant is targeting. This is a restaurant free from the burdens of taste and restraint. This is a restaurant that charges customers $22.50 for something called tequila turkey fettucine. Crazy Legs is a man who once ate three and a half pounds of pancakes in one sitting.

The third member of our group, David the EMT, seems less at home in the cavernous restaurant. Major League Eating requires EMTs on site for all competitive-eating events — so we tracked David down and paid for him to join us for two hours. He charges $60 an hour, which sounds pretty expensive if he just has to hang out, but is downright cheap if he has to break out the defibrillator paddles. There probably isn’t much danger: “After eleven years of Major League Eating, I wouldn’t train for a big lunch,” Crazy Legs says. “It’s pretty much intuitive at this point.”

His first impression, as he opens the vast menu: “The logo is vaguely Third Reich.” The plan, instead of ordering everything all at once, is to order as we go and see just how much food he can get through. “Let’s start with the pepperoni mozzarella sticks, the California egg rolls, the sashimi tacos, the Malibu oysters, and maybe an order of the bourbon brown sugar wings,” he tells the waitress. “We don’t need the celery or carrots with the wings. And I’ll hang onto the menu.” (When I later asked a rep for the restaurant if they would share calorie counts for their dishes, the answer was a firm “no.”)

David the EMT and I don’t order anything. The waitress, cheerful and unfazed, tells us she’ll be right back with some iced tea.

It’s just after noon, and the vibe of the room is subdued. A few tables are filled with tourists and office workers, and a mix of oldies and country music plays in the background. Not exactly the kind of scene that sets Crazy Legs’s competitive streak aflame. But he is a professional eater, and getting motivated is part of the job.

Soon, the apps are out. Crazy Legs starts in on the Malibu Oysters — six thick, broiled specimens covered with cheese and pepper sauce. “I know there’s an oyster under here somewhere,” he says. “It just seems to have a Western omelette on top of it.” He sucks them down in a few seconds. “Pretty good.”

Next, he moves to the sashimi tacos. “I just did a cannoli-eating contest,” he tells us. “These are kind of reminiscent of that. Hard shell with something soft inside. I taste kind of cold globules of fish.” He polishes them off. “It’s very condiment-heavy; there’s at least two sauces in here. It’s sort of a gyro fish taco mash-up.”

California egg rolls are less impressive. “They’re coleslawlike,” he says. “I’m not sure what the meat component even is. Chicken?” (According to the menu, yes.) 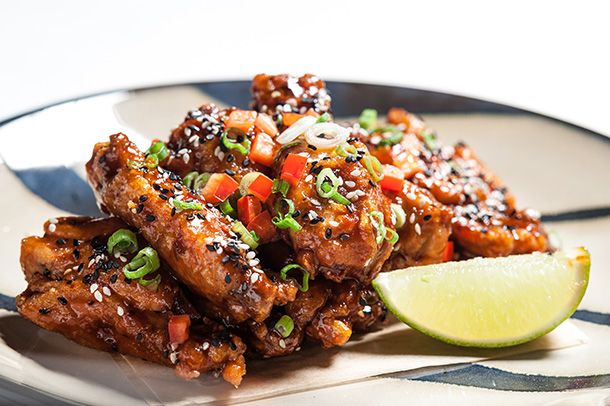 Conti can’t muster up much enthusiasm for the mozzarella sticks (he only eats four of the six) or the glistening brown chicken wings, but this is a man who once ate 42 ears of corn, so he soldiers on. As he dutifully gnaws at the wings, he asks David the EMT about the craziest call he’s gotten. The answer: a guy who called 911 after getting a bottle of Rave hairspray stuck in his rectum. “He didn’t want to go to the hospital,” David says. “He wanted me to pull it out myself.”

Crazy Legs considers this for a moment. “You don’t see accidents like that in competitive eating. You’re keeping all of your orifices clear when you’re eating a lot of food.” 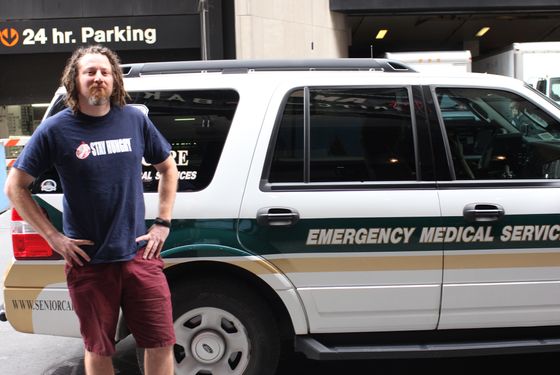 The verdict on the appetizers is meh, so Crazy Legs decides to move onto the entrees — we can revisit the apps later, should the need arise. There will be General Tso’s crispy pork shank, chicken tortilla soup, sangria-glazed shrimp, and Huli Huli roasted chicken.

The shank, an imposing, tumescent orb the size of a baby’s head, is first. It sits in a pool of sauce the color of crude oil. “This could be Guy Fieri’s swimming pool of condiments,” Crazy Legs says. The meat itself is surprisingly tender, but the sauce overpowers. The same is true of the chicken, bathed in “sweet Hawaiian BBQ sauce.” Crazy Legs finishes the dish. “It’s kind of a spicy pineapple jerk, but almost everything tastes like dessert.” As he moves on, he decides the shrimp, piled atop beige rice, is a dish that needs some work (“I’m not tasting any of the sangria”), and the chicken tortilla soup is only salvaged by the few cubes of avocado floating in its murky broth.

The tally at this point:

Crazy Legs looks a bit defeated, not only by the food’s volume, but by its mediocrity. Crazy Legs — a man who once ate 32-dozen oysters over the course of three hours, and spends the fourth of July regularly downing two-dozen hot dogs — nevertheless decides it’s time for dessert.

“There was a bananas foster for two, which I would order, but I don’t see it listed here,” he says. When the waitress reappears, she confirms its demise: “We killed it on like the second day.” Conti goes with the baked Alaska, something he’s never tried, and a chilled moscato creamsicle, a combination of Moscato, peach-infused vodka, and mango nectar. “That seems like it would connect with my feminine side,” Crazy Legs says.

As the bocce-ball-size Baked Alaska and peach-mango cocktail arrive, Crazy Legs turns to David the EMT. “You ever get calls for scurvy?” No scurvy, David says. His next stop that afternoon is downtown to check on David Blaine, who’s spent the last three days electrocuting himself and is probably dehydrated.

The Baked Alaska is fine, but the Creamsicle disappoints. “Instead of a summer taste, it’s more like a Game of Thrones winter moonshine mouthfeel,” Crazy Legs says, before deciding he’s finished eating. It’s the only thing he’ll eat for 24 hours. The final tally on the bill is $193.04 (the check also helpfully suggests a 20 percent tip of $35.46).

Before David splits, he asks Crazy Legs how he’s feeling. “I feel pretty good,” Crazy Legs confirms, leaning back in the booth. “It was sort of a typical meal for a small family. You’ll have to see who feels worse, me or David Blaine. Is it worse to get electrocuted for three days, or eat one giant meal at Guy Fieri’s?”

To the Brim: Crazy Legs Conti Versus Guy Fieri’s American Kitchen and Bar

moving 11:19 a.m.
The Famously Tiny I Sodi Is Moving to Bigger Digs Rita Sodi’s beloved little dining room will move — and finally get a bit bigger.
openings Yesterday at 9:25 a.m.
The Many Influences of Kwame Onwuachi The chef puts his own history on the menu at Tatiana.
By Tiffany Martinbrough
best in class Nov. 28, 2022
11 of the Very Best Air Fryers Custard toast at the ready.
feature Nov. 28, 2022
This Tasting Menu Tastes Like Pot A cross-country dive into high-flying, super-high dollar cannabis cuisine.
By Adam Platt
emergency discussion Nov. 22, 2022
The Menu Gets That Fine Dining Is a Cult Obscure location, insufferable clientele, and staff at the end of their rope — this horror-comedy’s got a lot in common with reality.
By Chris Crowley and Adam Platt
holiday gifts 2022 Nov. 21, 2022
The Best Gifts for Beer Lovers, According to Brewers and Beer Lovers Because you can do better than a novelty beer helmet.
profile Nov. 21, 2022
Scarr’s Pizza Is Expanding — and Adding a Sushi Counter How Scarr Pimentel became Orchard Street royalty.
By Tammie Teclemariam
the grub street diet Nov. 18, 2022
Jeremiah Moss Wishes Arturo’s Would Open Earlier “I feel like I’m betraying myself somehow when I eat nice food.”
By Alan Sytsma
the year i ate new york Nov. 17, 2022
Where to Watch the World Cup Our diner-at-large goes looking for that perfect 5 a.m. sports bar.
By Tammie Teclemariam
closings Nov. 15, 2022
Good-bye to Pearl, the Oyster Bar That Launched a Million Lobster Rolls “A perfect storm” of calamities led to the restaurant’s closing, according to owner Rebecca Charles.
By Steve Garbarino
openings Nov. 14, 2022
The Race to Finish Rockefeller Center’s Restaurants A handful of ambitious new spots are all vying for the attention of, well, everyone.
By Chris Crowley
the grub street diet Nov. 11, 2022
Margo Price Stops for Tacos in Texas and Katz’s in New York “Tonight we might get stoned and go eat a hot dog.”
By Alan Sytsma
the year i ate new york Nov. 10, 2022
Detours and Seafood in Jackson Heights What to do when a food pilgrimage doesn’t go as planned.
By Tammie Teclemariam
scenes Nov. 8, 2022
Saturday Night at Slutty Vegan Brooklyn’s best party is a line for veggie burgers.
By Chris Crowley
grub guide Nov. 7, 2022
11 Extraordinary Pies for Thanksgiving From the city’s most exciting new bakeries.
By Charlotte Druckman
the grub street diet Nov. 4, 2022
Zosia Mamet Shares Swedish Fish With Her Horse “I ride my horse pretty much every day, and I’m terrified of getting hungry.”
By Zach Schiffman
openings Nov. 3, 2022
A Ukrainian Bar Arrives in Soho Slava opens in the former Pegu Club space.
By Robert Simonson
the year i ate new york Nov. 3, 2022
Our Diner-at-Large’s New Favorite Restaurant At Syko, stock up on meze while you grab a bulgogi fatboy for the road.
By Tammie Teclemariam
remembrances Nov. 2, 2022
A Messy, Exuberant Keeper of Both House and Head In the ebullient too-muchness of her life as she shared it with us, Julie & Julia author Julie Powell reported on it like we were her pals.
openings Nov. 2, 2022
Pizza Obsessive Anthony Mangieri Opens Caffè Napoletana On Saturday mornings, Una Pizza Napoletana will transform into an Italian coffee counter.
More Stories