It’s been called “the caviar of the East.” Photo: Melissa Hom

The idea behind most of the items featured in this column is that they’re secret ingredients: You put a little Maggi in a salad dressing to covertly pump up the flavor of the salad, not to make it taste like Maggi. You add a few dashes of Angostura bitters to a stew because it accentuates the beef, not because it makes the stew taste like a Manhattan. You want to make the food better, not to show off the ingredients. But XO sauce is different. It’s got class; it’s got panache. It’s a sauce with credentials and you want to put it on display.

XO sauce was first created in Hong Kong — at either the Peninsula’s Spring Moon restaurant or at one of the many totally awesome fish restaurants in Kowloon — sometime in the early eighties. In China, as in every Jay-Z song, cognac is a status symbol, and the sauce was named in order to leverage the prestige and panache associated with “XO,” the esteemed cognac designation. There’s no actual cognac, or brandy of any kind, in XO sauce — but its off-the-charts-expensive ingredient list means it is fairly pricey ($15 for a few ounces) and, more important for our purposes, absolutely packed with deep, rich, smoky intensity. In fact, Vogue China once called it the “caviar of the East.” The sauce is primarily a chunky combination of dried seafood and Chinese ham (though store-bought brands might omit the ham): Dried scallops can easily cost $100 per pound in the U.S., and a layperson in America would have to smuggle a good Yunnan ham.

In other words, even though there’s no cognac in XO, it is still fancy stuff. And American chefs have taken to it: At the New York location of Hakkasan, a plate of stir-fried dover sole with XO will run you $46. (A whole Peking duck with XO and Chinese caviar will set you back $295.) David Chang’s Ssäm Bar dresses up market greens with XO. At Momofuku Ko, Chang’s team serves XO with duck heart and tofu. In Chicago right now, Alinea serves grilled razor clam with a dose of homemade XO.

You can buy decent XO sauce in any Chinatown (or online), and it’s worth the cost. But if you’re going all the way to Chinatown anyway, the better option is to buy the necessary ingredients and make your own — get the highest quality dried scallops you can find, and use good prosciutto or speck in place of the Yunnan ham (unless, of course, you have some secret source smuggling the real thing in for you).

Whether you buy it or make it, you can treat XO like a sort of super-powered soy sauce: In the recipes below, the sauce amps up pan-fried eggplant and grilled steak, but you can even just toss something simple like roasted broccoli in a teaspoon of XO. Plus, it keeps basically forever so you’ll always have some on hand in case dinner needs a dash of class.

Place scallops and shrimp in a bowl and cover with water. Let soak overnight, then drain.

Pulse ham in a food processor until finely chopped. Heat 1 cup oil in a large heavy skillet over medium high heat until hot, then stir in ham and cook, stirring occasionally, until ham is browned, about 4 minutes.

Pulse drained scallops and shrimp along with garlic, ginger, and shallots in food processor until finely chopped, then add to skillet.

Finely grind chiles in a spice mill, then add to skillet with salt and sugar. Cook XO sauce, stirring frequently, until browned, about 15 minutes. Transfer to a container and add remaining 1/2 cup oil. Keep refrigerated. 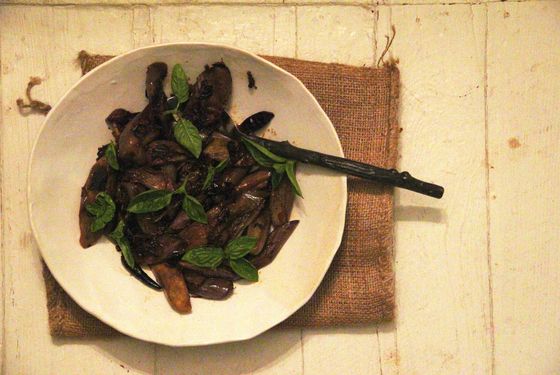 Heat oil in a large heavy skillet over high heat until hot. Add onion and cook, stirring, until browned, about 5 minutes. Add eggplant and chiles and cook, stirring frequently, until eggplant is browned in places, about 6 minutes. Stir in soy, vinegar, sesame oil, XO, salt, and pepper, then cover skillet and lower heat to medium. Let eggplant cook until tender and sauce is absorbed, about 5 minutes. Transfer eggplant to a serving platter and garnish with basil leaves. 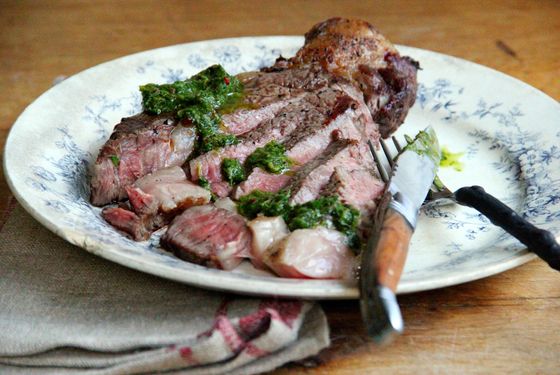 This sauce packs an absolute ton of flavor.Photo: Ian Knauer

Flavor Ammo: Is XO Sauce the World’s Most Baller Condiment?

Chinatown’s Jing Fong, Open Since 1978, Closes Its Dining Room
Chinatown’s Jing Fong, Open Since 1978, Closes Its Dining Room
All closings »
debates 12:33 p.m.
Hamantaschen Are Perfect, Thank You Very Much “I was actually surprised that there’s a smear campaign…”
By Rachel Sugar
apps 11:24 a.m.
Big Delivery Is Winning — Even If Everyone Hates It Delivery services don’t work for restaurant owners, but somehow they keep growing.
By Chris Crowley
labor fights Yesterday at 9:52 a.m.
After the Strike Fear and tension inside the Hunts Point Produce Market.
By Alexandria Misch
interviews Feb. 22, 2021
Marco Canora Is Ready For a Little Optimism “We need some encouragement, and we need some positivity.”
By Adam Platt
closings Feb. 19, 2021
Chinatown’s Jing Fong, Open Since 1978, Closes Its Dining Room The restaurant will continue to offer takeout and delivery as well as service from an outdoor patio.
reopening Feb. 19, 2021
NYC Bumps Indoor Dining Up to 35 Percent Starting Next Friday “Now’s the time to start doing more reopening,” says Andrew Cuomo.
the grub street diet Feb. 19, 2021
Andrew Yang Campaigns With Empanadas and Ramen “I was just ordering whatever I wanted.”
By Jane Starr Drinkard
vaccinations Feb. 18, 2021
Should Restaurant Owners Require Staff to Get Vaccinated? A controversial firing addresses a difficult question.
who ya gonna call? Feb. 18, 2021
Ghost Kitchens Will Always Be Dumb They are not, in fact, the future of restaurants.
By Rachel Sugar
closings Feb. 17, 2021
Good-bye to Mission Dolores, a Perfect Bar for Everything The bar, in a converted auto garage, straddled the literal and figurative barriers of its surrounding neighborhoods.
By Jason Diamond
food magazines Feb. 17, 2021
Saveur’s Print Magazine Has Come to an End The celebrated publication’s first issue was published in 1994.
layers Feb. 16, 2021
The Unstoppable Appeal of Lasagna It travels well. It reheats like a dream. You can even sell it from your restaurant’s makeshift general store.
guest chefs Feb. 16, 2021
Stone Barns Center’s Guest Chefs Bring Fresh Flavors to Fine Dining Shola Olunloyo’s tasting menus conjured West Africa by way of the Hudson.
By Adam Platt
the grub street diet Feb. 12, 2021
Klancy Miller Relaxes With Cinnamon Rolls “It is really cathartic to make dough.”
By Chris Crowley
celebrations Feb. 11, 2021
The Pandemic Can’t Disrupt My Lunar New Year Cooking How one New Yorker plans to eat her way through the holiday.
By Sarula Bao
closings Feb. 11, 2021
Good-bye to Flora Bar, a Restaurant That Will Be Impossible to Re-create Owner Ignacio Mattos announced his uptown dining room won’t reopen.
By Adam Platt
reopening Feb. 11, 2021
How NYC’s Bars and Restaurants Are Preparing for the Return of Indoor Dining “We’re not thrilled about it.”
By Rachel Sugar
license to fill Feb. 10, 2021
4 NYC Street Food Vendors on Finally Getting a Shot at Their Own Permit Even the waiting list to get one has been closed since 2007.
vaccinations Feb. 10, 2021
Restaurant Workers Can Get Vaccinated — Now Comes the Hard Part New York hospitality workers say the process to secure a vaccination appointment is confusing and maddening.
By Chris Crowley
coronavirus Feb. 9, 2021
How COVID Accelerated a Fight Against Food Deserts A push for healthier food options for one of New York’s hardest-hit populations.
More Stories