Everyone has kitchen gadgets sitting around that they never use. But the flip side is that we may have other gadgets sitting around that we could use for cooking, but never do. Up until now, this column has focused on secret ingredients, but there’s no reason why new techniques can’t also pump up the flavor of your food. And so I started wondering if it was possible to cook with a vaporizer. As it turns out, yes, you can. And it’s awesome.

Vaporizers aren’t designed with food in mind (with the possible exception of munchies); they’re used for “smoking” marijuana without any actual smoke. The machines, which start off cheap but can go for more than $500 for top-quality models, blow hot air over, ahem, “organic material,” vaporizing essential oils without combusting the herb. The temperature is capped to prevent burning, eliminating the acrid flavors and the lung-clogging by-products of smoke.

I first saw a vaporizer used for cooking purposes a few years ago, when Grant Achatz demonstrated a few of his notable Alinea dishes at Astor Center in New York. The evening had much to do with aroma. He poured liquid nitrogen over rosemary and fanned the room with pine as we munched on sous-vide Kobe beef. The beef was cooked without rosemary, but effectually tasted like it had been. Then Achatz fried rabbit kabobs on oak twigs and lit the leaves on fire. The whole room smelled like a wood-fired October game feast. Then he broke out his vaporizer and filled a plastic pillow with lavender vapor before puncturing the bag and passing it around the room. It reeked of Provence in July. At Alinea, his staff famously serves the flower-powered pillows to diners. The weight of a dish set atop the pillow slowly forces the lavender air out as you eat. It’s lovely.

As far as anyone knows, Achatz and his team first invented the idea of using the vaporizer for food purposes, but other chefs have been deploying theirs to great effect, too. The Culinary Institute of America’s Francisco Migoya vaporizes cinnamon into the packaging of the Bacon Maple Candy Bars the C.I.A. sells at its Apple Pie Bakery Cafe. There is no actual cinnamon in the bars, but when the packaging is ripped open the aroma of the spice mingles with the bacon and maple flavors. It’s far out, man.

Vaporizers are increasingly mainstream; the Times “Style” section even featured a snazzy portable model. Relatively affordable vaporizers can be found on Amazon. The thing to keep in mind is that the cheaper ones don’t moderate the temperature as steadily or force the air out the way more expensive ones do — you have to suck it out first, but the possible uses are still the same. Top a glass of beer with hop vapors (or alternate between taking drags and swigs); add rose essence to lamb chops; cover your favorite brownie with a dome and pump in cannabis vapors for a mod take on a classic. Or do what I’ve started doing and vaporize aromatic ingredients instead of adding them to the recipe. Below are recipes that work great with this technique: butternut ravioli with brown butter and sage vapor, and vanilla-vapor sugar cookies. Feel free to make your own cookies and ravioli, or just buy them and start sparkin’ up. 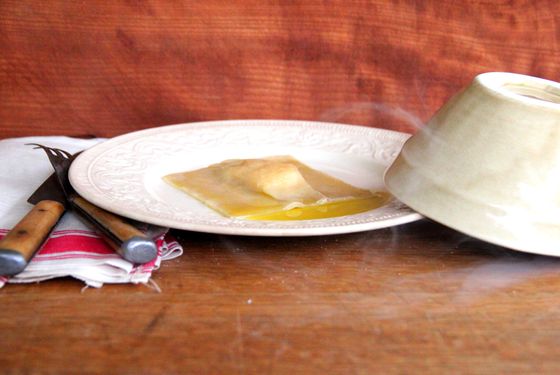 Pulse the flours and salt together in a food processor. Add the yolks, oil, and water, then run the motor until dough comes together and forms a ball. Wrap the dough in plastic wrap and let stand at room temperature for one hour.

Steam butternut over boiling water in a large pot fitted with a steamer basket until very tender, 20 to 25 minutes. Pulse squash in food processor with goat cheese and salt until combined. Let filling cool.

Cut the dough into four pieces. Roll out two pieces with a pasta roller to the thinnest setting. Place tablespoon-sized mounds of filling at two-inch intervals. Brush edges of pasta sheet with water, then gently lay second sheet over top, pressing down around filling mounds to seal. Cut into square ravioli with a knife or pasta cutter. Repeat with remaining dough and filling (you will have a little leftover filling).

Heat butter in a large heavy skillet over medium high heat until it begins to brown. Remove from heat and season with salt and pepper.

Cover each serving plate with a bowl. Place sage in vaporizer and vaporize, catching vapor under bowls. Place bowls on top of plates and serve. 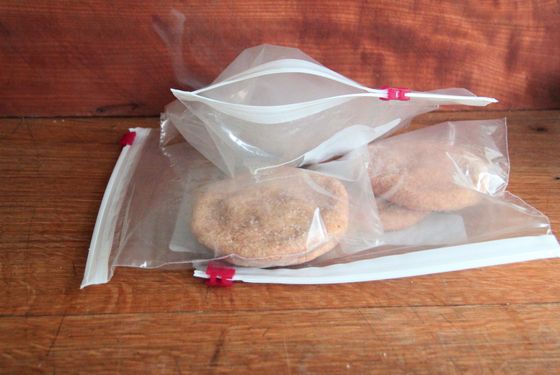 12 sugar cookies (store bought or using a recipe like this one
foregoing the vanilla in the recipe)
12 small ziplock baggies
1 vanilla bean, cut into 1/2-inch pieces

Place cookies in ziplocks and seal almost all the way. Place vanilla in vaporizer and vaporize into baggies. Seal completely and serve.

Ian Knauer is the author of The Farm: Rustic Recipes for a Year of Incredible Food.

Flavor Ammo: How to Cook With Your Vaporizer

openings 8:00 a.m.
Every Pastry at the New K’Far in Brooklyn Oversize rugelach, pistachio sticky buns, and bourekias inspired by TGI Friday’s spinach dip.
By Joshua David Stein
presentation Yesterday at 8:55 a.m.
The New Minimalism Chefs are leaning into spare, simple plates.
By Chris Crowley
rip Dec. 5, 2022
Alain Sailhac, a Chef’s Chef to the End, Has Died “He knew it all.”
reasons to love new york Dec. 5, 2022
The Best Pizza in the World Can Be Found in One Square Mile of Williamsburg Any neighborhood would be lucky to have even one or two of these places. Here are eight.
reasons to love new york Dec. 5, 2022
Margaritaville Is the Chillest, Cheesiest Place in Town It’s bright, cacophonous fun.
By Rebecca Alter
reasons to love new york Dec. 5, 2022
We Will Wait a Very Long Time for a Suprême The latest and arguably greatest entry in New York’s croissant craze.
the grub street diet Dec. 2, 2022
Andy Baraghani Likes Some Lumps in His Potatoes “This recipe has three kinds of dairy — labneh, cream, and butter — which I don’t think is overkill.”
By Alan Sytsma
the year i ate new york Dec. 1, 2022
Chocolate and Cheese in the Bronx A post-Thanksgiving trip to Chocobar Cortes.
By Tammie Teclemariam
report Dec. 1, 2022
How New Yorkers Are Saving, Swapping, and Splurging on Groceries “You gotta close your eyes and put it in the cart.”
By Paula Aceves and Jane Starr Drinkard
moving Nov. 30, 2022
The Famously Tiny I Sodi Is Moving to Bigger Digs Rita Sodi’s beloved little dining room will move — and finally get a bit bigger.
openings Nov. 29, 2022
The Many Influences of Kwame Onwuachi The chef puts his own history on the menu at Tatiana.
By Tiffany Martinbrough
best in class Nov. 28, 2022
11 of the Very Best Air Fryers Custard toast at the ready.
feature Nov. 28, 2022
This Tasting Menu Tastes Like Pot A cross-country dive into high-flying, super-high dollar cannabis cuisine.
By Adam Platt
emergency discussion Nov. 22, 2022
The Menu Gets That Fine Dining Is a Cult Obscure location, insufferable clientele, and staff at the end of their rope — this horror-comedy’s got a lot in common with reality.
By Chris Crowley and Adam Platt
holiday gifts 2022 Nov. 21, 2022
The Best Gifts for Beer Lovers, According to Brewers and Beer Lovers Because you can do better than a novelty beer helmet.
profile Nov. 21, 2022
Scarr’s Pizza Is Expanding — and Adding a Sushi Counter How Scarr Pimentel became Orchard Street royalty.
By Tammie Teclemariam
the grub street diet Nov. 18, 2022
Jeremiah Moss Wishes Arturo’s Would Open Earlier “I feel like I’m betraying myself somehow when I eat nice food.”
By Alan Sytsma
the year i ate new york Nov. 17, 2022
Where to Watch the World Cup Our diner-at-large goes looking for that perfect 5 a.m. sports bar.
By Tammie Teclemariam
closings Nov. 15, 2022
Good-bye to Pearl, the Oyster Bar That Launched a Million Lobster Rolls “A perfect storm” of calamities led to the restaurant’s closing, according to owner Rebecca Charles.
By Steve Garbarino
openings Nov. 14, 2022
The Race to Finish Rockefeller Center’s Restaurants A handful of ambitious new spots are all vying for the attention of, well, everyone.
By Chris Crowley
More Stories