A dash here, a dash there…. Photo: Melissa Hom

Bartenders’ recent fascination with bitters — the mysterious potions sold in little apothecary bottles — has created a market for all sorts of variations. There are citrus bitters, maple bitters, cherry bitters, celery bitters, bitters aged in whiskey barrels, chocolate bitters, etc., etc. There are a lot, is what I’m saying. But do bitters — often added in doses so small that they verge on homeopathic — actually impart a discernible difference? I sat down and drank a lot of booze to figure it out.

Bitters are made by taking high-proof spirits and infusing the fuck out of them with concentrated herbs, fruits, roots, and spices. These potions were originally concocted in the early 1800s for medicinal purposes, and the list of ailments they supposedly cured is wonderfully long and charming: liver complaint, sick headache, biliousness, indigestion, jaundice, salt rheum, constipation, humors, fever sores, colic, and diseases caused by “an impure state of the blood.” The bottles themselves are delightful and old-timey in their own way, too. Angostura’s label famously doesn’t fit on the bottle; Peychaud’s boasts about an award it won in 1869.

At some point in the mid-nineteenth century, someone decided that a jar full of booze might help the medicine go down. And now, bitters have been mixed into drinks for so long that we take their supposed impact on faith. I am sure there are nerds out there who spend whole weekends licking various bitters off their hands, but it’s difficult to believe these people when they espouse the difference between blackstrap and cherry-bark vanilla bitters — they care too much not to be delusional. So I set up a taste test to find out once and for all if a normal person can tell if bitters make any difference. And to see if they’d help me shake this damn case of blood impurity that’s been troubling me so.

First, my Wine Allergic Girlfriend and I added a few drops of each type of bitters we’d be testing — Angostura, Fee Brothers Orange, and Peychaud’s — into soda water. The colors were dramatically different. Angostura was the prettiest, a pale gold. Peychaud’s was rose pink, and Fee’s orange bitters were straight-up clear. 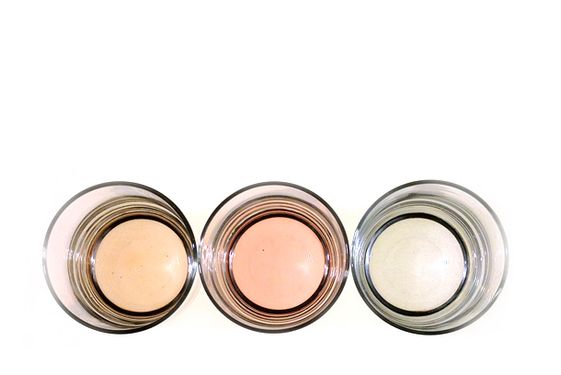 In addition to admiring the pretty colors, W.A.G. and I also tasted each of the bitters-enhanced soda waters, and they did indeed taste different. Tasting notes are boring, so quickly: Angostura tastes kind of like Coca-Cola; Fee’s Orange actually tastes like orange; Peychaud’s was pretty solidly cinnamon to me, and W.A.G. swears it is a ringer for a particular brand of hippie cherry licorice she ate as a kid. Bottom line: We can agree that bitters taste different. Which, okay, so that’s our baseline. Score one for bitters nerds.

The idea was that W.A.G. would make three versions of three cocktails (a rye old-fashioned, an improved gin cocktail, and a vieux carré), each with a different bitter. I’d taste them all blindly and see if I could tell the difference.

Old-Fashioned
“The color is a dead giveaway,” said W.A.G. after making the three drinks. Because we didn’t want any reddish tints tipping me off, it was decided I’d drink all the drinks with my eyes closed. 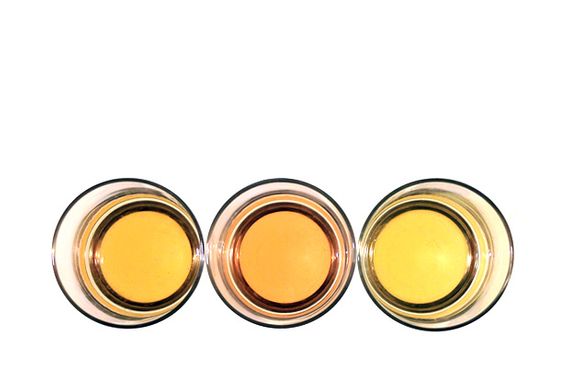 The same bitters, mixed into bourbon.

“This one is the Fee’s,” I said about old-fashioned number one, after drinking all three. I didn’t really taste orange, per se, but I somehow felt the orange, at least compared to the other two drinks. The second old-fashioned I picked out as Peychaud’s, and the remaining one I put down as Angostura. They did indeed taste different to me, but that difference was jumbled up in my pre-sip expectations about how they’d taste, as well as some good, old multiple-choice test-taking strategy (“W.A.G. probably wouldn’t start with Angostura because it’s the most basic, so that’s out for the first one,” etc.).

Improved Gin Cocktail
The improved gin cocktail (a wonderful concoction of Genever gin, Maraschino, simple syrup, and bitters) apparently showed the color of the bitters even more than the old-fashioned, and so W.A.G. told me I really had to close my eyes for this one. I did my best to close my eyes harder.

Primed, I easily picked out the one made with orange bitters. But I mixed the other two up. Better, but still not very good. Perhaps because I was searching for differences in my improved gin cocktails, I did sense differences. But like something I was catching out of the corner of my eye, those differences disappeared when I looked directly at them. If I thought too much about it, I started to doubt my senses, and all the drinks started to taste the same.

All of which is to say: I was drunk, so we decided W.A.G. would taste the next cocktail.

Vieux Carré
This was the most complicated recipe we tried: rye whiskey, brandy, sweet vermouth, bitters, and Benedictine. Those ingredients are all heavy hitters, flavor-wise. Naturally, I assumed the bitters would have less of an impact in a drink with this many ingredients. It’s like someone playing the triangle amid an entire orchestra of kettle drums, trombones, and violins.

For the purposes of the taste test, I made each V.C. with only one type of bitters, though the traditional recipe calls for two. W.A.G.’s palate trumps mine, and she nailed the orange, like, immediately. She mixed up Peychaud’s and Angostura, as I had with the improved gin cocktail, but like me, she says she felt a difference in the drinks.

I made one more V.C., this one with the traditional dose of two kinds of bitters. It takes a decisive flick to get a good dash of bitters; it comes with practice and something akin to confidence. Some bitters nowadays come in little eyedropper bottles and these, too, are a joy to use. For the V.C., picking up two small old-looking bottles and dashing each pleased me even more than just adding one.

That’s when I realized the major difference that bitters can make. It’s not really about the flavor that bitters impart on a drink; it’s about the mystique.

My taste-test was hardly exhaustive, but it’s still clear that bitters are pretty darn subtle when compared to the big-flavored ingredients like gin, whiskey, sugar, or lime juice, if only because we add the bitters in such a relatively minor amount.

What bitters actually do is add another layer of ceremony to the process of mixing a drink. There’s a reason why bartenders always add the bitters at the end, too: It’s a signaling mechanism. Not only that the drink is now “complete,” but that the person making the drink cares enough to put real thought into what, precisely, is going into the drink — down to the very last dash. Bitters are fundamentally old-timey and strange, and they give drinks a sort of magic-potion feel. The actual flavor they impart is in the taste bud of the beholder.

Earlier: Sloshed: How to Order a Proper Drink in Any Bar, Anywhere

Sloshed: Will a Dash of Bitters Do Anything at All?

Why the Closing of New York’s Lexus Restaurant Is a Real Loss
Why the Closing of New York’s Lexus Restaurant Is a Real Loss
All closings »
reopening Yesterday at 1:29 p.m.
The Rise and Fall of Anton’s 25 Cent Martinis “Nobody wants to mess with the SLA.”
shipwreck! Yesterday at 11:54 a.m.
Highly Anticipated Cookbook Delayed Because … It Probably Sank The supply chain has literally collapsed.
faqs Jan. 25, 2022
What to Do If a Famous Anti-Vaxxer Walks Into the Restaurant Where You’re Eating Recent news suggests not all New York City restaurants are following vaccination regulations.
shopping Jan. 24, 2022
The Cervo’s Team Launches a Preserved-Seafood Line “Our love of anchovies and sardines runs pretty deep.”
openings Jan. 24, 2022
Inside Mena, Victoria Blamey’s First-Ever Solo Restaurant The new project opens this week.
By Mahira Rivers
the grub street diet Jan. 21, 2022
Chef Alexander Smalls Always Says Yes to Duck Eggs “I graduated from quail to duck. For me, it’s a more fertile taste.”
By Chris Crowley
it's soup season Jan. 20, 2022
Everything You Need to Know About ‘Soup Mother’ A new name for an ancient approach to cooking — and something we all might want to try.
the food biz Jan. 19, 2022
Battle of the Roasted Garlic Achaars A Trader Joe’s knockoff has put condiment-maker Brooklyn Delhi in a pickle.
By Rob Patronite and Robin Raisfeld
killed it Jan. 18, 2022
It’s Time to Bid Adieu to Cooking With Paris Maybe Paris Hilton’s cooking show was just too complicated for a world that values easy answers.
endorsements Jan. 18, 2022
A Sharper, Snappier, Picklier Health Salad Poulet Sans Tête’s version goes heavy on the cucumbers and skips the sugar.
restaurant review Jan. 18, 2022
Dining and Dashing at Semma Attempting to savor South Indian delights during a COVID surge.
By Adam Platt
rip Jan. 15, 2022
Good-bye to Ed Schoenfeld, a Man Who Changed the Way New York Ate The restaurateur and food-world impresario has passed away.
By Adam Platt
urban forager Jan. 14, 2022
At Té Company, the Persimmons Are Hung Up to Dry “The old way of preserving ingredients — for me, it’s fascinating.”
the grub street diet Jan. 14, 2022
Starlee Kine Spends Lunch Breaks With Her Dog “For every human that left the city, it seems a dog has been added.”
By Rachel Sugar
reopening Jan. 13, 2022
How Bad Has Omicron Been for New York’s Restaurants? As with everything these days, it depends who you ask.
By Chris Crowley
closings Jan. 13, 2022
Why the Closing of New York’s Lexus Restaurant Is a Real Loss Against all odds, it served as a worthy passport to food from around the world.
By Joshua David Stein
gifts they might actually want Jan. 12, 2022
The Best Gifts for Beer Lovers, According to Brewers and Beer Lovers Because you can do better than a novelty beer helmet.
omicron Jan. 12, 2022
Now We Have to Worry About Groceries, Too? Store shelves are looking emptier for some very real reasons.
members only Jan. 12, 2022
New York’s First NFT Restaurant Is Coming Soon. Wait — What? You’ve got questions. We’ve got (some) answers.
best in class Jan. 11, 2022
25 of the Very Best Drinking Glasses Twenty-one interior designers and service-industry professionals weigh in on their favorite glasses for water, juice, iced tea, or something stronger.
By Dominique Pariso
More Stories