It’s been two days since Paula Deen confirmed the rumors that she’d been diagnosed with adult-onset diabetes, and the noise from her critics is growing. It seems like just about everyone has a problem with the way Deen has handled this situation. The consensus is that using a three-year-old diagnosis as a springboard for a diabetes-drug endorsement deal is a move that’s slimy at best, and malicious at worst. Even Ad Age says Deen’s “brand is suffering.” In response to the backlash, Deen announced yesterday on the Chew that she will donate an undisclosed percentage of her earnings to the American Diabetes Association. But that gesture doesn’t appear to have swayed public opinion all that much.

Dr. Marion Nestle takes umbrage with the fact that Deen isn’t acknowledging that improved diet and exercise routines are important steps in treating type 2 diabetes, or even preventing it in the first place. Nestle writes that “even a relatively small reversal of calorie balance can make symptoms of type 2 diabetes disappear and reduce or eliminate the need for drugs.”

Maverick Farms co-founder Tom Philpott notes that there are very real problems with the drug Deen is endorsing: “The FDA approved Victoza in January 2010, but it did so amid strong evidence of a link to thyroid cancer,” and in June of 2011 the group “issued a warning about the risks of thyroid cancer and pancreatitis associated with the diabetes drug liraglutide (Victoza).” Philpott adds that “some medical authorities” question whether diabetes drugs like Victoza offer any benefits at all. (Of course, any patients who actually let Paula Deen influence their medical decisions might have bigger problems than high blood glucose.)

Here’s the thing: The Paula Deen that appears on TV has never been anything other than a caricature. Her whole Southern-grandma shtick is so cartoonishly over-the-top that it’s amazing anyone takes it seriously. (That she developed a recipe for deep-fried butter should be enough of an indication that she’s in on the joke.) More than anything, it’s impressive that she managed to parlay that character into a multi-million-dollar empire built on Krispy Kreme bread pudding and endorsement deals that are as cheesy as her recipe for ham-and-banana casserole. 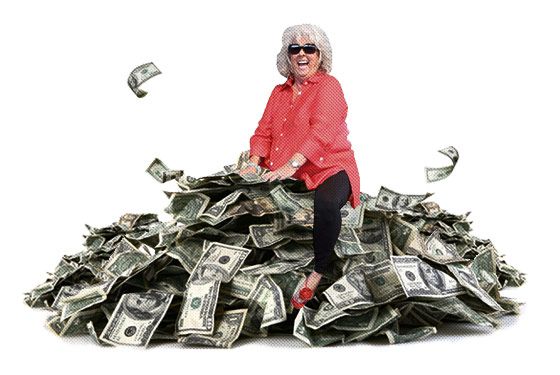 Why would anyone expect Deen to handle her diabetes diagnosis any differently? Of course this woman is going to endorse a quick-fix diabetes drug while making only passing reference to the fact that everyone should eat better and exercise more. This is obviously not a woman who has ever cared about her audience’s health; this is a woman who cares about fattening up her bank account.

Chewing the Fat: Paula Deen Attack Stories Show No Sign of Slowing Down

Why the Closing of New York’s Lexus Restaurant Is a Real Loss
Why the Closing of New York’s Lexus Restaurant Is a Real Loss
All closings »
the grub street diet Yesterday at 6:00 a.m.
Chef Alexander Smalls Always Says Yes to Duck Eggs “I graduated from quail to duck. For me, it’s a more fertile taste.”
By Chris Crowley
it's soup season Jan. 20, 2022
Everything You Need to Know About ‘Soup Mother’ A new name for an ancient approach to cooking — and something we all might want to try.
the food biz Jan. 19, 2022
Battle of the Roasted Garlic Achaars A Trader Joe’s knockoff has put condiment-maker Brooklyn Delhi in a pickle.
By Rob Patronite and Robin Raisfeld
killed it Jan. 18, 2022
It’s Time to Bid Adieu to Cooking With Paris Maybe Paris Hilton’s cooking show was just too complicated for a world that values easy answers.
endorsements Jan. 18, 2022
A Sharper, Snappier, Picklier Health Salad Poulet Sans Tête’s version goes heavy on the cucumbers and skips the sugar.
restaurant review Jan. 18, 2022
Dining and Dashing at Semma Attempting to savor South Indian delights during a COVID surge.
By Adam Platt
rip Jan. 15, 2022
Good-bye to Ed Schoenfeld, a Man Who Changed the Way New York Ate The restaurateur and food-world impresario has passed away.
By Adam Platt
urban forager Jan. 14, 2022
At Té Company, the Persimmons Are Hung Up to Dry “The old way of preserving ingredients — for me, it’s fascinating.”
the grub street diet Jan. 14, 2022
Starlee Kine Spends Lunch Breaks With Her Dog “For every human that left the city, it seems a dog has been added.”
By Rachel Sugar
reopening Jan. 13, 2022
How Bad Has Omicron Been for New York’s Restaurants? As with everything these days, it depends who you ask.
By Chris Crowley
closings Jan. 13, 2022
Why the Closing of New York’s Lexus Restaurant Is a Real Loss Against all odds, it served as a worthy passport to food from around the world.
By Joshua David Stein
gifts they might actually want Jan. 12, 2022
The Best Gifts for Beer Lovers, According to Brewers and Beer Lovers Because you can do better than a novelty beer helmet.
omicron Jan. 12, 2022
Now We Have to Worry About Groceries, Too? Store shelves are looking emptier for some very real reasons.
members only Jan. 12, 2022
New York’s First NFT Restaurant Is Coming Soon. Wait — What? You’ve got questions. We’ve got (some) answers.
best in class Jan. 11, 2022
25 of the Very Best Drinking Glasses Twenty-one interior designers and service-industry professionals weigh in on their favorite glasses for water, juice, iced tea, or something stronger.
By Dominique Pariso
reopening Jan. 10, 2022
The Restaurant Industry Has Always Treated Sick Workers With No Remorse Will anything change because of Omicron?
By Chris Crowley
the grub street diet Jan. 7, 2022
Actor Jeff Hiller Is Eating His Feelings “My husband does basically all of the cooking and I just reap the benefits.”
By Chris Crowley
reopening Jan. 6, 2022
Eric Adams Has Already Lost New York’s Restaurant Workers That was fast!
cheers Jan. 5, 2022
To-Go Drinks Are Coming Back, Governor Hochul Says “Cheers, New York.”
what to eat Jan. 5, 2022
The Time for Stuffed Peppers Is Now Especially at Dhamaka.
More Stories