If somebody called you an artisan in, say, 1538, it wasn’t exactly a compliment. You were of no concern to society, you chipped away at your trade, you had nothing to say. But on May 27, 1731, things started to shift: Benjamin Franklin wrote and printed Apology for Printers, and helped shift the national attitude toward appreciating the working man. Maybe Benjamin Franklin would have thought twice about that if he’d known that 300 years later, giant companies would co-opt “artisan” in an effort to hawk fast-food burgers and delivery pizza.

In 1902, the Brooklyn Daily Eagle runs “Landlord Trust” (a story that was sort of like the 100-year-old forefather of Ryan Sutton’s the Price Hike), and had this to say: “The truth is that many of the prices charged in restaurants are beyond all reason and excuse … but in such cases we pay not only for the material but for the skill of a chef who commands the salary of a college president, and who, in the invention of sauces and serving of the viands, is an artist as well as an artisan.”

Fast forward past a couple of World Wars, bread-makers using “artisanal” to differentiate their handmade bread from machine-made stuff, and the mid-eighties introduction of ciabatta — now frequently marketed as “artisan bread” — and we arrive at 2001, when the New York Times awards two stars to Terrance Brennan’s Artisanal bistro, the restaurant named for artisan cheese and itself a vague nod to the finer handmade things in a world saturated with mass-market food. It was the pinnacle of “artisan.” It was also the beginning of the word’s demise into meaninglessness. 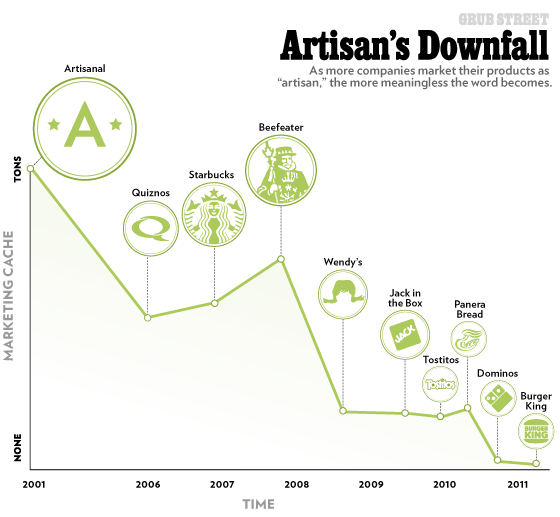 May 30, 2001: William Grimes calls Artisanal “an easy restaurant to like,” enjoys its “honest bistro cooking,” and awards the restaurant two stars in the Times. Cachet or passé? Strong cachet.

March 10, 2004: Parbaked, flash-frozen “artisan” breads flood supermarkets. Author Peter Reinhardt of the Bread Bakers Guild of America tells the Times, “The term ‘artisan’ is in danger of being completely compromised.” Cachet or passé? The term is in trouble, but on the other hand, frozen bread gets better. Neutral.

April 6, 2006: The quality of parbaked bread continues upward, and Quizno’s starts using the word to describe its own bread. Meanwhile, Wendy’s attempts to compete with Subway by debuting its own line of “deli style” sandwiches served on, you guessed it, “artisan bread.” Cachet or passé? The beginning of the end, but credit where it’s due: These were trailblazers in the art of co-opting “artisan” for fast-food purposes. Moderately passé.

August 28, 2007: Starbucks announces it has joined forces with Marcus Samuelsson to develop a line of “Artisan Coffees and Pastries.” Six months later it announces the arrival of “Artisan-Style Chocolate.” One year later, Starbucks introduces breakfast items served on artisan bread. Cachet or passé? Getting Samuelsson was a good move at the time. Cachet for the coffee chain. No noticeable effect on Samuelsson.

October 31, 2008: Beefeater 24 gin is introduced with the words “artisan cut” stamped on the label. What’s an artisan cut? Tea added to the gin makes its flavor profile much too tannic during the last leg of distillation, so approximately one third of each batch gets “cut,” by which we mean tossed (or rather, “hand-tossed”). Cachet or passé? Sort of cachet for marketing purposes, as long as you don’t think too much about the process that the company is actually describing.

February 25, 2009: The Times publishes “Brooklyn New Culinary Movement,” bringing the Franks and the Mast Brothers wider national attention, and, in the process, solidifying the borough’s “artisan” brand. Apparently unaware of the 1902 column in the Brooklyn Daily Eagle, Cut Brooklyn knife-maker Joel Bukiewicz says, “I had no idea there was going to be this convergence of artists, artisans and food culture in Brooklyn.” Cachet or passé? The focus on small brands brings the word back. Strong cachet.

July 5, 2009: Perhaps emboldened by the Times story, Wendy’s introduces its latest breakfast sandwich: a fried egg, Asiago cheese, bacon, and hollandaise sauce served on … artisan bread. Cachet or passé? It’s not even the first time the fast-food chain has used the term. Passé.

April 12, 2010: In a press release, Jack in the Box declares some indubitable victory, saying that it has “enhanced its prolific breakfast menu with a Grilled Breakfast Sandwich featuring a premium artisan bread, two fried eggs and two slices each of American cheese, ham and bacon.” Cachet or passé? The chain is pretty late to the game here. Way passé.

June 6, 2011: Panera Bread launches its first major television advertising campaign. Founder Ron Shaich appears in one spot and says of his 1,000-plus location chain, “We wanted a place with soul, we wanted a place that was real. We start with artisan bread, handcrafted by professional bakers using fresh dough. It just tastes better.” Cachet or passé? Mom-jean levels of suburban passé.

September 26, 2011: Domino’s introduces its new “Artisan Pizzas.” The boxes are printed with the following text: “We’re not Artisans. We don’t wear black berets, cook with wood-fired ovens or apprentice with the masters in Italy.” But they do put spinach and feta cheese on a pizza, which the company decides is artisanal enough. Cachet or passé? The term is limping at this point. Can you go past passé?

October 24, 2011: Burger King rolls out its Chef’s Choice Burger. According to Nation’s Restaurant News, the thing is served on an “artisanal-style bun that draws its inspiration from brioche.” And thus, as the Burger King co-opts a term at which real royalty once scoffed, the marketing cachet of “artisan” plummets, perhaps forever. Cachet or passé? Irredeemably passé.