The legal drinking age is a somewhat arbitrary number. In most of the United States, it’s 21. In France, people can legally drink when they’re 18. Japan says 20 is the right age. In Wisconsin, anyone can drink at any age, as long as they’re with their parents or of-age spouses. But whichever cutoff point seems right to you, one thing is clear: Nobody aged 18 to 21 should drink all types of alcohol. Have you seen a 21-year-old lately? It is ridiculous. They barely look ready for coffee, let alone a stiff drink. Just as no high-school kid should try to pull off a tweed jacket, no 21-year-old should be ordering a Plymouth martini, up, heavy on the vermouth, with a twist. Age is perhaps the most important ingredient for successful drinking, and I don’t mean that in any sort of legal context.

Take that tweed blazer: It might look great on a 60-year-old college professor; it will look dopey on a 21-year-old college student. The same is true of drinks. Some look good on old men, some look better on twentysomethings. Rarely do all drinks look good on all people. Just as you can’t imagine a college freshman actually enjoying a Rob Roy, you probably can’t imagine your grandparents taking shots of After Shock from an ice luge — unless you grew up in a family that is awesome.

We know these rules intuitively, perhaps, but let’s go ahead and make them explicit. 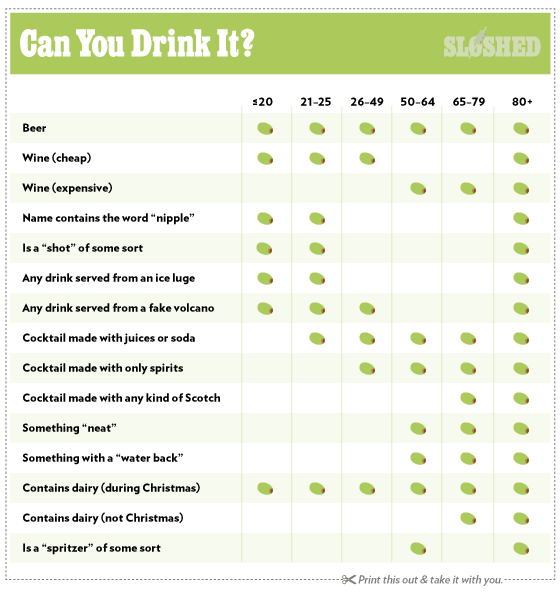 The most important thing you can put in your wallet.Illustration: Jen Cotton

Under 21: Beer and Wine Only, Please
Stick to beer and wine, preferably cheap beer and wine. You won’t appreciate the expensive ones, and trust me when I say you are not ready for the hard stuff. TRUST ME.

21 to 25: Light Drinks, Shots, and Slippery Nipples
Move into things like gin and tonics and Collins drinks, and if you’re ever going to do shots that involve Jell-O and/or another person’s belly button, now’s the time. But if you order anything neat or with a water back, I’ll find you and force you to drink a bottle of grape Pucker. Forty-year-olds aren’t allowed to skateboard to work, and you aren’t allowed to throw around the same drink order as Charles Bukowski. That’s just how it works.

Best choice: Margaritas, Jäeger bombs, anything you can drink out of one of those huge bong-shaped cups that they have in places like Las Vegas. Then, a Bloody Mary to work off your hangover the next day.

26 to 49: Stiff Drinks
At this point, drink pretty much anything you want, except old-man drinks (see: 65 to 79, below). Learn as much as you can about cocktail-mixing here.

A note about Martinis: Don’t make a habit of ordering these until you’re at least 35, and when you do, make sure they are the gin version, served up (vodka martinis on the rocks are for mild alcoholics who have given up on happiness). Martinis are for Rat Pack members and James Bond. There isn’t a single twentysomething doing anything suave enough to warrant drinking one. The drink is inevitably going to be cooler than the drinker unless said drinker is: (a) Actually really cool and accomplished, like Dean Martin or Winston Churchill, or (b) not interested in seeming cool at all. These are both fundamentally impossible things for people in their twenties.

A note about Manhattans: Rye Manhattans have enjoyed a big resurgence, but there’s no denying that the drink smells like most people’s grandpas. That’s part of the appeal, of course, but it’s also a reason why nobody under the age of at least 40 should go near one.

Best choice: Get thee copies of Ted Haigh’s Vintage Spirits and Forgotten Cocktails and David Wondrich’s Imbibe!; drink everything in them.

50 to 64: Expensive Whisk(e)y and Wine
Here’s the problem with having everything available to you during that last decade and a half of life: You find your favorite drink and stick with it. I have seen more women in their fifties order Sauvignon Blanc, and only Sauvignon Blanc, than I’ve ever wanted to. This is also around the time that otherwise-levelheaded adults stop caring about what they drink, as long as it gets the job done. (Here come the vodka martinis on ice.) Technically, this is fine, but this is also a good time to start in on that Scotch habit and blow your kids’ inheritance on great wine (see: below note).

Best choice: Drinking the kind of wine that has to be kept in a cellar and then decanted; taking a single malt or a snifter full of cognac after your meals.

65 to 79: Old-People Drinks
Here come the old-man and old-woman drinks. What makes an old-person drink? If it sounds disgusting, but not in a teenager way, then you’re probably there. In other words, now’s the time to drink Brandy Alexanders on the reg. Brandy, creme de cacao, and heavy cream: That is the drink of someone who butters their steak.

Best choice: You know what I said about Slippery Nipples only being appropriate for people in their twenties? Forget it: An 85-year-old ordering one is instantly going to be everyone’s favorite person in the bar. All the better if they do it while wearing a nice tweed jacket.

Earlier: How to Get Into the Small-Batch Spirits Boom Without Becoming a Booze Snob