Summer officially ended yesterday, and soon the unofficial season at Coney Island will end as well. When it does, seven mom-and-pops on the boardwalk will shut forever — including Paul’s Daughter, the one my family owns.

Central Amusement International, which the city hired to manage its property at Coney Island, wants what company president Valerio Ferrari calls a “more refined, cleaner” feel for the boardwalk. And the shops the company is shuttering “don’t fit into [CAI’s] vision.”

There have been “Last Summers” before, including 2009, when my father watched as the Astroland rocket was torn off his shop’s roof. But this past summer, Central Amusement asked the mom-and-pops to submit nine-year business plans in order to see if we could make our shop fit into Ferrari’s vision. My sister, Tina, submitted ours and offered to spend hundreds of thousands of dollars to modernize our shop. It didn’t matter; I believe the decision to evict had been made long before the plans were submitted. After being a part of Coney Island for the last six decades, we now have to close the store next month. My father says losing the store is “like a death in the family.” 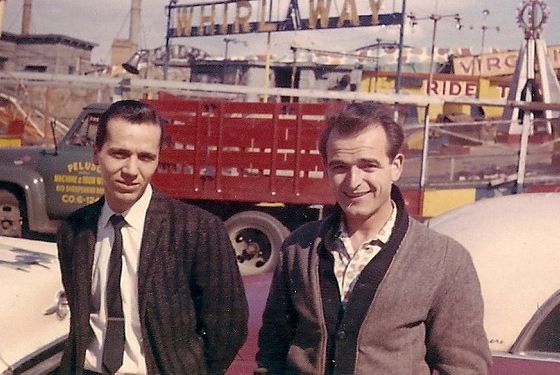 Paul (right), with his business partner Gregory in 1962Courtesy of the Georgoulakos family

My dad, Chief as he’s known on the Island, has been out there for 63 years, almost since the day he arrived in the United States from Greece. Chief started at a milk bar under the BMT depot when he was 21 years old. There, he met Gregory Bitetzakis, a fellow Greek. The two would go on to become partners for half a century. They worked for another Greek, known by everyone as Pineapple, until 1962, when they opened their first Gregory & Paul’s on the boardwalk at West 8th.

They eventually opened three more. They lost one in 1968, when Nelson Rockefeller bought the land and donated it to the Aquarium. A fire destroyed another in 1980. Gregory closed the second-to-last location when he retired in 2009.

As a kid, I loved visiting the shop. I’d get a grape drink from the dispensers and thick crinkle-cut fries as they came out of the fryer, something I still do.

As teenagers, my sister and I worked on holidays. I have never spent the Fourth of July anywhere else. When the weather was good, the crowds were so deep you couldn’t see the boardwalk or the ocean, just lines of hot hungry people, for hours on end.

In 2009, after the rocket had been taken down, Chief decided to give up his last remaining store. My sister offered to take it over; she’s the one who renamed it Paul’s Daughter.

It’s always seemed to me that both my father and the store would go on forever — there has always been a store, and my father’s always been there. I have no memories of him anywhere else when I was a kid (other than two blurry images of him on line at Radio City’s Christmas show).

But now, we must pack up the store and vacate no later than November 4, even though our hearts are still in Coney Island — and business is still great. “Maybe I’ll start over on the Bowery,” Chief says, referring to the alley in Coney Island, not the now-hot stretch in Manhattan. Whatever happens, the store will continue for me, with the rocket on its roof, Chief behind the grill, and lines of people stretching out to the sand.

No More Summers: The End of the Coney Island Mom-and-Pops

drinks 9:00 a.m.
Via Carota Is Launching Its Own Bottled Cocktails Negronis, Manhattans, and espresso martinis that are ready for your home bar and your TikTok feed.
By Chris Crowley
the underground gourmet Yesterday at 8:00 a.m.
Italian Beef So Good You’ll Forget About The Bear The sandwiches at Bobbi’s stand out on their own terms.
By Tammie Teclemariam
gifts they might actually want Jan. 30, 2023
The Best Gifts for Beer Lovers, According to Brewers and Beer Lovers Because you can do better than a novelty beer helmet.
field notes Jan. 30, 2023
The Tin Building Has Everything (Except a Purpose) Jean-Georges Vongerichten’s lovely but lifeless $200 million food hall.
By Adam Platt
the grub street diet Jan. 27, 2023
Sylvan Esso’s Amelia Meath Wants the Weird Appetizers “If there’s a bad app, I’ve gotta try it.”
By Alan Sytsma
the year i ate new york Jan. 26, 2023
The Hotpot Haze of Haidilao A steamy, celebratory feast in Flushing.
By E. Alex Jung
news Jan. 25, 2023
Here Are the Semifinalists for the 2023 James Beard Foundation Awards New York is well represented by Department of Culture, Kru, and more.
groceries Jan. 25, 2023
Welcome to the Shoppy Shop Why does every store suddenly look the same?
By Emily Sundberg
the underground gourmet Jan. 23, 2023
Now Is the Time for Trini Roti The Caribbean staple is a perfect midwinter lunch.
By Tammie Teclemariam
the grub street diet Jan. 20, 2023
Kashana Cauley Will Drive an Hour for the Right Yogurt “I believe in good yogurt more than other people believe in God.”
By Zach Schiffman
conversations Jan. 18, 2023
The Rush to Call Fine Dining’s Death Does Noma’s closing announcement really mean other restaurants are doomed?
By Chris Crowley, Alan Sytsma, and Tammie Teclemariam
top story Jan. 17, 2023
Restaurant Workers Are Paying to Keep Their Own Wages Low The National Restaurant Association lobbies Congress to keep the minimum wage low. Revenues from food-safety courses help pay for that.
the underground gourmet Jan. 16, 2023
Where to Find the City’s Best New Soup Elaborate broth is back.
By Tammie Teclemariam
the grub street diet Jan. 13, 2023
Highsnobiety’s Willa Bennett Is Thinking About Her Overnight Oats “I’ve never tried to make the oats while I’m away. It wouldn’t be the same.”
By Zach Schiffman
best in class Jan. 12, 2023
12 of the Very Best Air Fryers Custard toast at the ready.
the year i ate new york Jan. 12, 2023
In Search of the New York Happy Meal Our new diner-at-large looks for the best place to enjoy a martini and fries.
By E. Alex Jung
first taste Jan. 11, 2023
Gjelina Is Already Manhattan’s Hottest Lunch Seven years after it was first announced, the Venice Beach import is finally open.
By Alan Sytsma
closings Jan. 9, 2023
The End of Noma As We Know It René Redzepi is closing his Copenhagen restaurant at the end of 2024.
By Alan Sytsma
the grub street diet Jan. 6, 2023
Planet Money’s Jack Corbett Loves a Sale at the Grocery Store “I’m a bargain shopper, aside from my $18 pine nuts.”
By Zach Schiffman
rip Jan. 4, 2023
Chef King Phojanakong Has Died The founder of Kuma Inn was 54.
More Stories