I recently decided to buy a flask. The idea was to get something nice, something I could eventually pass on to my son, along with the art of shaving and advice on how to throw a punch without mussing your hair. Flasks recall a bygone era of unsanctioned drinking — they came of age during Prohibition, when a man in want of a drink needed to carry his own booze. Now, of course, people can drink plenty of places. But you still can’t drink everywhere, which is why there’s satisfaction to be found in not-exactly-legal public drinking.

I don’t mean “public” like outdoor bars, or restaurants with patios. I’m talking about parks, beaches, drive-in movie theaters, sidewalks: wherever drinking isn’t really allowed. There is no federal law about this, so it is up to the states to decide whether it’s cool or not, and most states agree: It is not really cool. But flasks exist, legally, because people like sneaking booze, just as head shops and Phish concerts exist because people like pot. 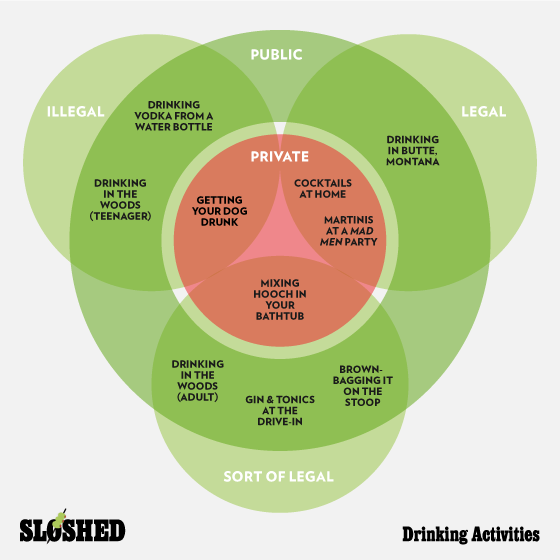 Print out a copy and keep it in your wallet for handy reference.Illustration: Jen Cotton

Places Where It’s Totally Legal
Only seven states in the U.S. allow open containers in public — Georgia, Louisiana, Missouri, Montana, Nevada, and Pennsylvania — which really just means they don’t actively ban it. Instead, they pass the buck onto their municipalities to decide whether and how their citizens might imbibe publicly. Butte, Montana, for instance, is the one town in the country that (awesomely) allows people to drink anything they want, anywhere they want. Of course, New Orleans is probably the most well-known example of this kind of free-drinkin’ mentality, though even the Big Easy has some stipulations about what and where you can drink.

It sounds great, but there is something manufactured about the experience — at least in New Orleans, Las Vegas, and Savannah, all places where I have drunk from plastic containers on the street. Rather than “drinking in public,” this type of imbibing feels more like drinking in a giant outdoor bar, except with more unsolicited boobs (pro) and shittier drinks (con).

The ideal drink: Milk Punch (in New Orleans, before noon); Hurricanes, if you must (after noon); margaritas everywhere else.

Places Where It’s Illegal
Now we’re getting into it. This is where you’ll find flasks and their less elegant, more dangerous relative, the water bottle filled with vodka. My own flask epiphany came when I realized that along with convenience-store candy, I could also sneak whiskey into my local Cinemark movie theater. You know what would make Iron Man 2 even better? I thought to myself, Some Jim Beam. But I was wrong. Nothing could make Iron Man 2 any better.

Flasks are cool and they’re easy to conceal, but anyone who has ever drunk from one knows they’re a dead giveaway when it comes to actually drinking. Everyone recognizes that characteristic “tilt your head back and take a nip” motion required for sipping. A flask just showcases that you are hiding alcohol; it’s like trying sneak bullets somewhere by hiding them inside a gun.

The water bottle filled with clear liquor is much, much sneakier. Any high schooler will tell you that vodka works well; gin isn’t bad if you can mix it with something. But there is a happy medium to be found between this method and the flask: all that white whiskey that’s been popping up. It still looks like water, but it doesn’t taste like drinking warm rubbing alcohol.

The ideal drink: Flask: The best bourbon you can afford. Water bottle: Beefeater gin (if you have a mixer), or something like Kings County Corn Whiskey (if you don’t).

The beer-in-a-brown-paper-bag best symbolizes this compromise between the law (no open containers) and the reality (a lot of public drinking isn’t worth busting). I remind you of Major Bunny Colvin’s great soliloquy from The Wire about this: The paper bag is “a great moment of civic compromise. That small, wrinkled-ass paper bag allowed the corner boys to have their drink in peace. And it gave us permission to do police work.” Of course, the compromise hinges on the integrity of the public drinker not to do anything that would require police work — acting belligerent, peeing against a building, unscrewing the heads on parking meters.

I recently sat outside in a public park near my house in Massachusetts with a 22-ounce beer from Stone Brewing in a brown paper bag. I wanted to be outside as the sun was going down. Some kids chased each other around blankets put out by their parents; a few college kids walked through and settled under a tree. Frisbees drifted by.

The ideal drink: The new tallboys from Sixpoint, if you can find them, or Miller High Life if you can’t. If you can swing a thermos, gin and tonics wouldn’t be a bad idea.

In places like New Orleans, there is no pact with the people around you. You are allowed to drink, so your pact is with the law. But out in the world away from Bourbon Street — whether that’s a movie theater, or the beach, or a park — the beauty of public drinking lies in the pact you must make with the people around you. You won’t ruin things by losing your cool, and they won’t rat you out. By looking the other way, they’re acknowledging that having a drink in the park on a hot, late-summer night is a pretty great thing to do.

Sloshed: How to Drink in Public, the Right Way