We’ve seen the food and art worlds collide many times before. Tomorrow, Jiminie Ha of Chinatown gallery W/ ——— is teaming up with Leong Leong Architecture to release the first issue of White Zinfandel, a twice-yearly magazine that charges artists and writers to create works inspired by certain menus or meals. The first issue is based on Food, the pioneering restaurant that Gordon Matta Clark opened in Soho in 1971 along with fellow artists and dancers. “The menu items are a combination of words that are really interesting and very metaphoric,” explains Ha. As a result, she says artist interpretations ranged from literal (one artist re-created the assigned dish and photographed the dinner party where it was served) to abstract (Peter Sutherland’s take on Mock Chicken Drumsticks consists of stills from PETA casting videos showing sexy vegetarians). 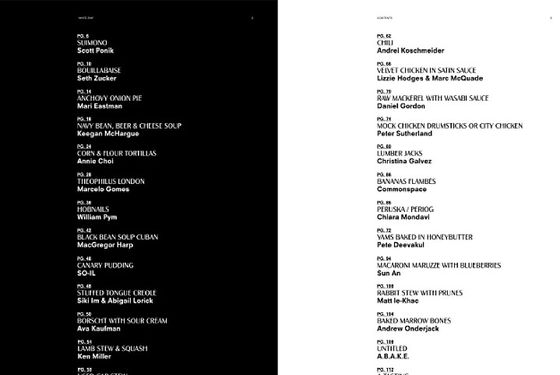 Tomorrow, the issue’s editors and sponsors (Absolut backed the magazine’s production) will convene in the lobby of the Woolworth building, where Momofuku Ko chef de partie Jonathan Ory will offer up his interpretation of Food’s “bone dinner” (it consisted of oxtail soup, marrow bones, and frogs’ legs), while Sean Garvey of Revival Vineyards Ko sommelier Beth Lieberman pours the wine. The dinner is private so we have no idea whether white zinfandel will be served, but you can pick up White Zinfandel the magazine for $20 at Project No. 8, the New Museum, Creatures of Comfort, and other locations. The table of contents is below. Oh, and we’re told the next issue will be inspired by TV dinners!

the grub street diet 6:00 a.m.
Stephanie J. Block Celebrates Taco Tuesday on Monday “Our whole place kind of smells like a Mexican restaurant.”
By Zach Schiffman
the year i ate new york Yesterday at 12:44 p.m.
What Does Wellness Taste Like? Our diner-at-large goes in search of some good food.
at home in asian america Yesterday at 8:00 a.m.
The Asian Food Fixation Why does identity have to revolve so tightly around what we eat?
By Mallika Rao
openings Sept. 28, 2022
Who Is the Tokyo Fixer? And Why Does He Have His Own Bar in New York? Welcome to Shinji’s.
By Jason Diamond
openings Sept. 27, 2022
Masalawala & Sons Is Open, and Park Slope Is Amped The duo behind Dhamaka expands to Brooklyn.
By Chris Crowley
rsvp Sept. 26, 2022
How Shyan Zakeri Created the City’s New Must-Have Burger Shy’s Burgers is not your usual pop-up.
By Margaret Rhodes
best in class Sept. 23, 2022
15 of the Very Best Water Bottles Always be hydrating.
By Emma Wartzman
are u coming? Sept. 23, 2022
Richie Akiva Is No Longer the King of Nightclubs, Okay? His post-pandemic move: a celebrity-packed … members-only club.
By Brock Colyar
the grub street diet Sept. 23, 2022
Bobby Finger Is Excited to Eat Indoors Again “Put me as close to people as possible. Put me at the bar. Put me behind the bar.”
By Rachel Sugar
openings Sept. 22, 2022
Eisenberg’s Enters Its A24 Era The name is new, the counter is old, and a Safdie brother is now involved.
By Jason Diamond
the year i ate new york Sept. 21, 2022
Who Are All These People Eating on DeKalb? It might be the most confusingly busy restaurant stretch in the city.
By Tammie Teclemariam
openings Sept. 20, 2022
At Pecking House, the Line Is Finally Manageable You don’t have to wait for New York’s hottest fried chicken anymore.
By Chris Crowley
openings Sept. 19, 2022
Urban Hawker Brings Singapore to Midtown Inside the new food hall, which features 11 vendors from the island nation.
By Mahira Rivers
best in class Sept. 16, 2022
11 of the Very Best Air Fryers Custard toast at the ready.
the grub street diet Sept. 16, 2022
Karen Chee Is Looking Forward to Her Morning Egg “Peeling the shell is like unwrapping a gift.”
By Rachel Sugar
the year i ate new york Sept. 15, 2022
What’s Wrong With Cocktails Right Now? Bartenders and drinkers both seem a bit bored.
By Tammie Teclemariam
rip Sept. 14, 2022
RIP to the Wine Genius Who Created Two-Buck Chuck Fred Franzia had a way with words too.
gifts they might actually want Sept. 14, 2022
The Best Gifts for Beer Lovers, According to Brewers and Beer Lovers Because you can do better than a novelty beer helmet.
openings Sept. 14, 2022
A Le Coucou Chef Has Taken Over at Manhatta Justin Bogle breaks down the technique on a dozen new dishes.
By Joshua David Stein
report Sept. 12, 2022
Why Have Restaurant Menus Gotten So Simple? Call it the great pare-down.
By Chris Crowley
More Stories